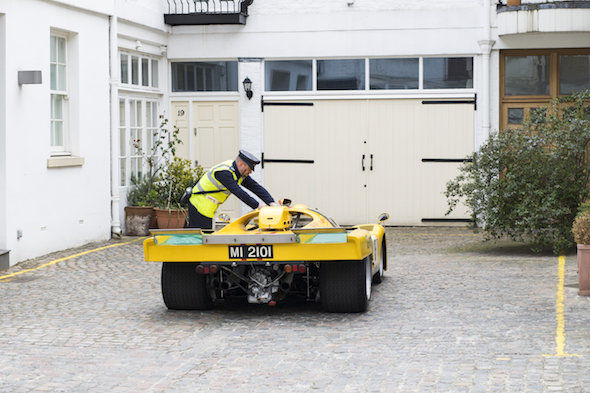 An incredibly rare Ferrari fell victim to London traffic wardens recently after it was momentarily stopped in London's exclusive borough of Kensington and Chelsea.

The £10million Ferrari 512M, which is more used to high-speed racing circuits such as Le Mans, was briefly parked in a quiet mews while staff at classic car dealer Fiskens – who had recently acquired the vehicle – photographed it.
However, the bright yellow model was hardly inconspicuous, and soon drew the attention of two traffic wardens who were snapped – by the dealership – assessing the desirable car and slapping it with an £120 fine.

Rory Henderson, an acquisition specialist at Fiskens, told the Daily Mail: 'It is a quiet area and we brought the car out onto the mews to be photographed.

'They were deadly serious and weren't going to be stopped. I thought it was a bit unnecessary as we do try to be considerate of our neighbours.

'I think it is probably the most expensive car ever ticketed.'

Incredibly rare Ferrari 512M gets slapped with parking ticket
Up Next

Boasting a 12-cylinder, 5-litre engine it was first sold to the Escuderia Montjuich private racing team in April 1970.