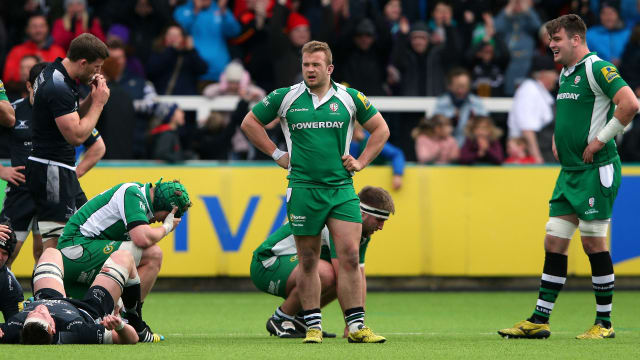 Marcus Watson scored the only try of the game against his former club as Newcastle Falcons beat London Irish 13-6 at Kingston Park to leave the Exiles looking destined for relegation to the Championship.

Bottom side London Irish made the long journey north knowing they really needed a victory against their relegation rivals to give themselves a fighting chance of staying in the Premiership.

But Tom Coventry's men are seven points adrift of Newcastle with only two games remaining after they were second best in what looks like being a decisive encounter in the north east on Sunday.

Ex-Irish wing Watson came up with the solitary try, racing 60 metres to touch down after intercepting an attempted pass from Greig Tonks in the first half to edge the Falcons in front.

Two Tonks penalties either side of a three-pointer from Mike Delany had given the Exiles a 6-3 advantage, but they paid the price for some poor handling when the Falcons were on the back foot.

Delany converted Watson's score and Juan Pablo Socino was successful from the tee early in the second half to ensure the Exiles are facing relegation from the Premiership for the first time.

Coventry's side were able to claim a losing bonus point, but that will surely not be enough as they prepare to face Harlequins and Wasps in their final two games, with the Falcons up against leaders Saracens and Sale Sharks.

Sale enhanced their chances of finishing in the top six with a 29-17 bonus-point victory over Bath in the other game to be played on Sunday.

Steve Diamond's side moved up to sixth, one point better off than Quins with a game in hand, after Vadim Cobilas, Will Addison, David Seymour and Mark Easter went over to consign Bath to defeat at the AJ Bell Stadium.