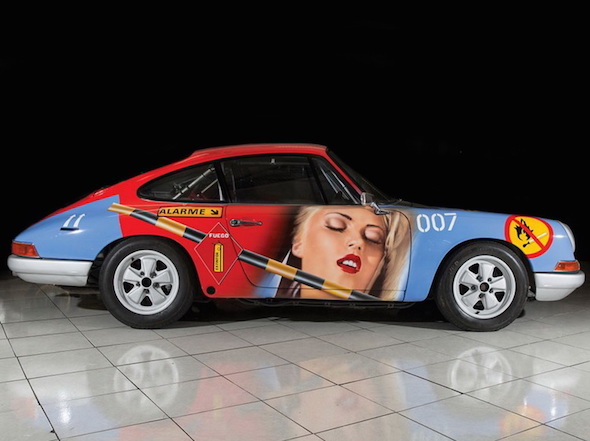 A Porsche with an interesting paint job is set to head to auction in Monaco next month without a reserve price.

The 1965 911 '007' by Peter Klasen has been dubbed a 'unique rolling work of art' by auctioneers RM Sotherby's, who will offer it in their auction on May 14.
Originally finished in light ivory with a black leather and grey corduroy interior, the short-wheelbase 911 model was handed over to the German artist, who gave it the '007' paintjob. With an eye peering through a target on the bonnet, and a woman's face and lips adorning the sides, the car makes a vivid statement. After its completion in 2009, the project was presented a show of Klasen's work at the Le Tri Postal exhibition centre in Lille, France.

Other of Klasen's rolling works of art include a series of Porsche racecars, a Ferrari 328 GTS and even a Tesla Model S.


The 911 is a fully prepped racecar with a FIA HTP and boasts a 190hp 2.0-litre boxer engine which features two triple-throat Weber 40 IDS carburetors. All four wheels are fitted with disc brakes, while the gearbox is a five-speed manual.

With the chassis number 300617, it was only one of 3,154 early 911s built in 1965 and was sold new through Baden-Auto of Freiburg-im-Breisgau, with the added options of a Webasto gas heater and a set of Dunlop 165-15 radial tyres.
Tags
Read Full Story Click here to comment