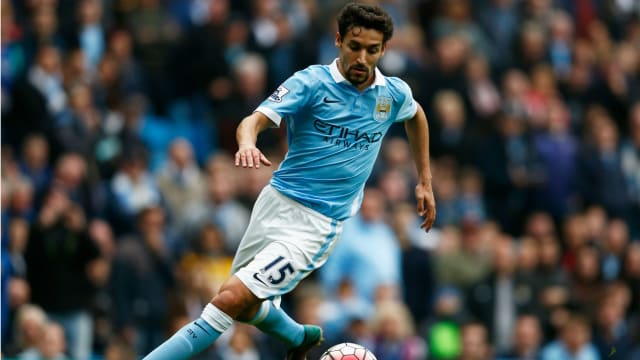 Jesus Navas has called on Manchester City to forget the Champions League and focus fully on Saturday's Premier League trip to Chelsea.

City reached their maiden Champions League semi-final with a thrilling 3-2 aggregate win over Paris Saint-Germain on Tuesday, a triumph sealed by 1-0 second-leg victory at the Etihad Stadium.

However, City still have work to do if they are to take their seat at European football's top table next season by virtue of finishing in the Premier League's top four.

Pellegrini's men are well placed to do just that, sitting four points clear of arch-rivals Manchester United with six games to play after bouncing back from their derby defeat with wins over AFC Bournemouth and West Brom.

But, with a continental glamour tie on the horizon, winger Navas has urged his team-mates to avoid taking their eye off the ball domestically - especially at Stamford Bridge this weekend.

"We have to keep getting three points out of each game," the Spain international told City's official website.

"We have done well in the last couple of games and we must keep it that way.

"We are feeling very confident and we are working together to achieve our goal. As I say, we are keeping the ball nicely and creating danger.

"Chelsea are a dangerous team. We know this is one of the toughest games we could have at this stage but we can't afford any slip-ups."

Pellegrini was coy on the injury status of captain Vincent Kompany after the PSG game, but the centre-back could return from his latest calf problem at Chelsea.

Raheem Sterling remains sidelined with the groin injury he sustained in last month's defeat to United.

For deposed Premier League champions Chelsea, all that remains to play for this season is pride and the prospect of impressing incoming manager Antonio Conte.

Guus Hiddink's side have won just one of their last six games in all competitions - a 4-0 drubbing of the hapless Aston Villa - and were beaten 1-0 at Swansea City last time out.

Hiddink is set to once again be without skipper John Terry (Achilles) and Eden Hazard (hip), and it remains to be seen whether Gary Cahill (tendon), Willian and Nemanja Matic (both knocks) can return.

This season's reverse fixture finished 3-0 to Pellegrini's men, although Chelsea did gain a measure of revenge by thrashing an inexperienced City side 5-1 in the FA Cup fifth round.