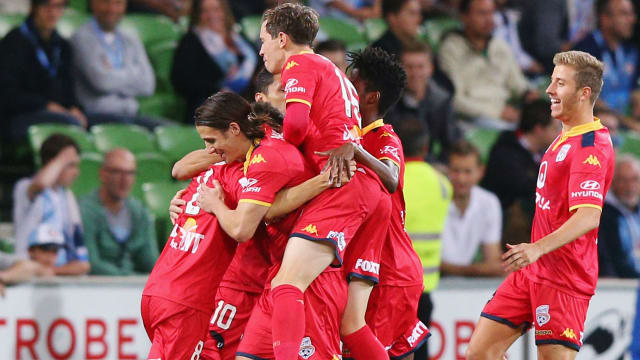 Brisbane Roar must beat Melbourne Victory away from home on Saturday to claim the A-League's Premiers' Plate after Adelaide United moved top with a 2-0 win at Melbourne City on Friday.

Kicking off the final round of the regular season, Guillermo Amor's team claimed all three points with relative ease at the home of a fellow title challenger, as an Isaias Sanchez goal and Bruce Djite's penalty did the damage in the opening 45 minutes at AAMI Park.

Adelaide took an early lead when Spanish midfielder Isaias steered a free-kick through the wall and into the bottom corner of the net just four minutes in, City's veteran goalkeeper Thomas Sorensen unable to get down in time to keep out the curling strike.

The Reds continued to dominate the half and doubled their lead shortly before the break.

Former City player Stefan Mauk was felled inside the area by Sorensen, Djite sending the ex-Denmark international the wrong way to score from the spot.

The drama did not stop there, though, an angry confrontation breaking out between both sets of players and continuing down the tunnel after the half-time whistle. City's goalkeeping coach Joey Didulica was sent to the stands by referee Strebre Delovski for his part in the fracas.

Adelaide were narrowly denied a third goal just after the hour mark, Dylan McGowan seeing his header hit the back of the net only for the strike to be harshly disallowed for a foul on Patrick Kisnorbo in the build-up.

City, whose own challenge for the Premiers' Plate subsequently ended with the defeat, offered little threat in the final exchanges, as the Reds booked a home semi-final, with a place in the grand final now just one match away for the South Australian team.