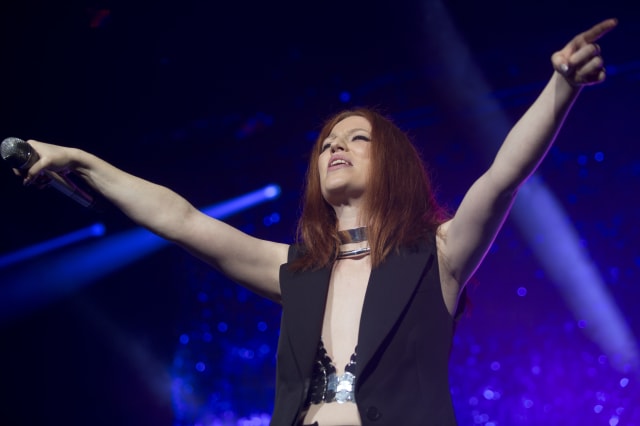 There's bad news for Jess Glynne fans: if you missed out on tickets when they first went on sale, then you'll face more outrageous markups on resold tickets than fans of any other star.

Credit comparison site TotallyMoney.com researched the highest resale price for a variety of current acts, to find out how much more their tickets sell for than the face value. Jess Glynne topped the list with an incredible 5028% price increase - with the most expensive selling for an eye-watering £1,000 on Stubhub.

At number two in the highest mark-up charts is pop playboy Justin Bieber, whose £45 face value tickets can go for £1,300: a 2789% increase. That's more than £1,000 for a standing ticket at the O2 Arena - so you'd better hope you're not behind someone tall.

And in third place is Adele, whose tickets can command a 2129% price increase from a face value of £95 at a staggering £2,117.75. Her tickets were the priciest on the resale list - because they had the highest face value in the first place.

"Some artists sell better than others," says Joe Gardiner from TotallyMoney.com. He points out that while this is bad news for fans who don't snap up tickets in time, it can be good news for those who need to change their plans. He says: "If you time it right, you can make some serious cash for yourself if you put a ticket you don't want up for sale."

The price isn't the only thing you need to watch out for if you are buying a second-hand ticket. Online ticket fraud rose 55% last year and at least £5.2 million was scammed out of unsuspecting victims. These tend to be sold online - often through social media - and offer hard-to-find tickets that turn out not to exit - or that simply never show up after fans hand over their cash.

If you're desperate to get to a sold-out event, then your best bet is to buy from an official resale site approved by the event organiser - so you can be sure that the tickets are genuine and that you will get in.

If you buy from reputable resale sites, you also have some protections. Stubhub, for example, guarantees you will get your tickets in time for the event, and that they'll be valid for entry. If this doesn't happen, they will either try to source replacements or offer you a refund. They will also handle all customer service issues - so you won't have to negotiate direct with the seller to get your money back.

Clearly, however, these protections don't include any kind of guarantee that you won't pay enormously over the odds. But what do you think? Would you buy second-hand tickets? And would you pay 50 times the face value for them? Let us know in the comments.

Jess Glynne fans face worst second hand ticket rip off
The video was directed by Mark Romanek, featuring the siblings escaping from earth and all its media stresses on a very white space ship. It cost an astonishing $7 million back in 1995. Nowadays that works out at roughly $10.5 million. The lighting alone was said to have cost $175,000, and the computer-generated spaceship was hardly a bargain either. The fact that the whole shoot took 11 days meant the costs escalated.
Madonna's 2002 video for her James Bond theme song was directed by Swedish outfit Traktor and cost $6.1 million at the time. That's $7.8 million in today's money. The Bond-style imprisonment, and subsequent fencing duel featuring Madonna fighting herself, meant that every shot of the film involved video effects.

Madonna chose to express herself through the medium of a $5 million video directed by David Fincher (who went on to direct Fight Club and The Panic Room). That works out as $9.3 million today. The video featured a host of controversial representations of power and gender - as well as a city full of skyscrapers - which was expensively produced. It was apparently inspired by the 1927 film Metropolis.

In 1995 Madonna blew $5 million on the video for Bedtime Story, directed by Mark Romanek, the king of expensive videos. That would be worth $7.5 million today. The enormous number of digital effects means that although shooting lasted six days, post-production dragged on for week after expensive week. The final result was one of her most experimental, and is kept by a number of art museums and galleries.
Michael Jackson's 1991 hit came with a John Landis video which cost $4 million to make, which is $6.7 million in today's money. For his cash he got appearances from Macaulay Culkin and Tyra Banks, and a whole heap of computer generated transformations. Turning a panther into Michael Jackson doesn't come cheap.
The Guns 'n' Roses video was directed by Andy Morahan in 1993 and cost $4 million. That works out at $6.4 million today. The huge cost has something to do with the fact that the video is ten minutes long, and attempts to tell the story of separation and divorce through epic scenes. These include the band boarding a transport aircraft, Axl Rose jumping off the deck of an oil tanker, and Slash rising from the bottom of the ocean.
The Puff Daddy track featuring Notorious B.I.G. and Busta Rymes featured a video by Marcus Nispel, which cost $2.7 million in 1993. That's $3.8 million today. It's another epic, at eight minutes long, and includes appearances from Dennis Hopper and Danny DeVito. The creation of the streets of 3002 AD, building a helicopter and blowing it up, the stunt men and pyrotechnics were all major costs.
MC Hammer's 1991 hit had a video by Rupert Wainwright, which cost $2.5 million at the time. That's $4 million in today's money. Hammer gained a reputation for knowing how to spend money, and this video is no exception. The appearances by everyone from James Brown to James Belushi,the special effects and the pyrotechnics all add up.
Mariah Carey (featuring Jay-Z) spent $2,5 million on a Brett Ratner video in 1999. That's $3.4 million today. It has been called a 'mini chic flick', and features Carey both as herself, and as the woman seeing her boyfriend in secret. The sets (including renting a cinema and a mansion), the cast, the appearance of Jerry O'Connell, and the animated sequence all added to the cost.
Busta Rhymes (featuring Janet Jackson) spent $2.4 million on a Hype Williams video in 1999 - which is worth $3.9 million today. A major cost has to be the computer morphing again, which sees the singers repeatedly morph into various forms. Busta's glass costume was also said to have cost $40,000.
Up Next