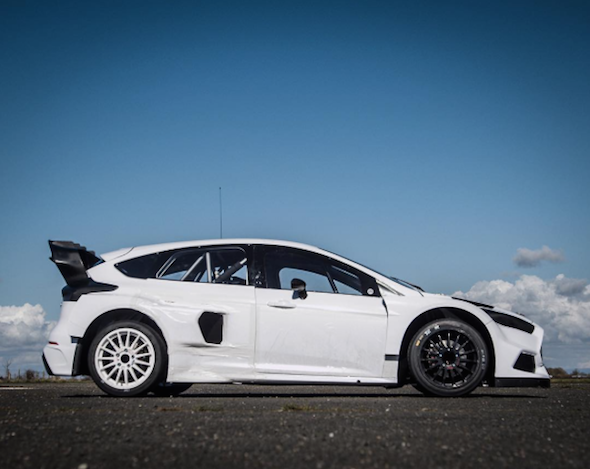 Fresh from the release of his Gymkhana Eight video, Ken Block has been at it again, this time at the wheel of a brand new Ford Focus RS RX.

Viewers who watched the whole of the 'Ultimate Exotic Playground: Dubai' video may have noticed the closing image of a computer-generated Focus RS RX – a specially designed Rallycross model based on the all-new, four-wheel-drive Focus RS.
However, since the teaser shot, nothing had been seen (or heard) of the aggressively styled car, until the Hoonigan himself began to post a series of photographs and videos on his Instagram page yesterday.

From what Block has revealed of the car, it both looks and sounds incredible, and Ford has confirmed that it produces upwards of 600bhp from its 2.0-litre four-cylinder engine, and can accelerate from 0-60mph in under 2.0 seconds

Carbon fibre fitments adorn the inside of the car and the button-filled steering wheel even boasts a special 'Hoon' button, which Block thanks M-Sport Ltd for in one of the posts.


Another photo shows an interesting feature of the car – the set back position of the car's wing mirrors, which the talented racer explains the reason for in the cryptic caption: 'Anyone notice something unusual about this photo? Hint: it's got a lot to do with my seating position in the new Ford Focus RS RX racecar. Which is absolutely ridiculous, in a good way. Ha.'

He follows this with the hashtags 'back seat driver' and 'all about that balance', which suggests that the engine in the Rallycross car is placed further back than in the production model, and as a result the driver's seat is set further back in the vehicle's cabin.

While this handful of images is just about enough to introduce the model, Rallycross fans worldwide can't wait to see the car in action.
Tags
Read Full Story Click here to comment