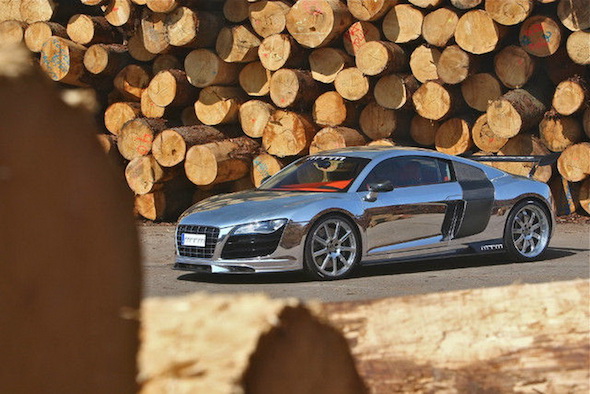 Can you see yourself in this car? If the answer is yes – and you're not just referring to its mirror-like livery – then good news, it's up for sale and can be yours for just shy of £400,000.

The first generation Audi R8 received a makeover at the hands of equally German tuner MTM three-years ago, and one of the major modifications was the stripping and polishing of its bodywork panels – a process which took more than 700 hours of work.
To compliment the bare metal and give the car an even sleeker look, leather-wrapped carbon-fibre seats, widened sills, an adjustable rear spoiler, and a front spoiler lip were also added.

The changes weren't purely aesthetic however. MTM decided to replace the original, naturally aspirated engine with a twin turbocharged unit from the carmaker's RS6 C6, which allows the car to reach 62mph from a standstill in just 3 seconds, and top out at over 215mph.

A reinforced 6-speed transmission was specially designed to cope with the 5.0-litre V10's impressive power output of 791bhp.

Polished chrome Audi R8 hits the market in Germany
Up Next


The car has an impressive history, having featured at the 2013 Geneva Motor show, Top Marques Monaco, the Goodwood Festival of Speed and Le Mans 24hr. It even underwent a high-speed test at Italy's Nardo Ring.

With such gravitas behind the car, it's little wonder that MTM are asking €500,000 (£398,260) for the honour of taking it off their hands. For that price you could buy three of the new, second generation models.
Tags
Read Full Story