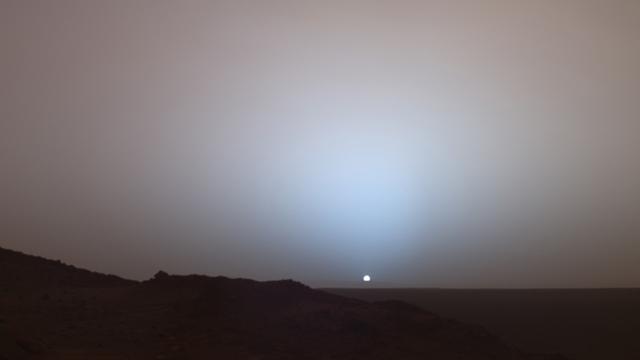 An old image of a martian sunset has been making the rounds online recently.

The picture was captured on 19 May 2005 by NASA's Mars exploration rover Spirit. The striking panoramic view shows the sun as it dips underneath the Gusev crater.

The image is actually a mosaic of photographs taken sometime shortly after 6pm, during Spirit's 489th roving the martian surface.

Aside from the obvious location difference the martian sunset distinguishes itself from our own.

On earth the sun appears more red due to the scattering of blue light as it passes through our own atmosphere.

For a more technical explanation NASA notes dust in the martian atmosphere has fine particles that permit blue light to penetrate the atmosphere more efficiently than longer wavelength colours.

That causes the blue colours and the mixed light coming from the sun to stay closer to the sun's [part of the sky compared to the wider scattering of yellow and red colours.

In January of this year British astronaut Tim Peake shared an incredible set of photos of London and the UK taken from the International Space Station.

Peake posted the pictures on Twitter with the caption: "#London midnight Saturday – I'd rather be up here... but only just!! #toughcall".

The British astronaut has been in space for nearly four months now having successfully launched on 15 December.

NASA image shows incredible martian sunset (video)
"Tonight's Finale: The Richat Structure. A giant gazing eye upon the Earth."
"To commemorate the passing of the Iron Lady, in the centre of these London lights is #10 Downing Street."
"The Australian Outback is effortlessly crazily beautiful."
"The effortless natural art of the southern Sahara."
​"The beautiful and violent ugliness inside a naked volcano. Chad, Africa."
"Beijing just after sunset. I'm still trying to spot the Great Wall, but it's hard as it's narrow and dun-colored."
"A heraldic Spring dragon of ice roars rampant off the coast of Newfoundland."
"Canada rocks."
"Dr. Seuss-inspired swirls in the Black Sea."
"Little farmers, big farmers and nature, in Turkey."
"Big storm swirling off the Irish coast on 9th May."
"A sunny day in Scotland"
"To some this may look like a sunset. But it's a new dawn."
"Hope you Bruins play a memorable game tonight vs the Leafs."
Up Next