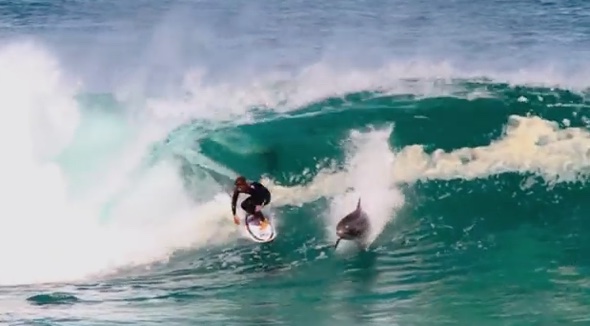 A dolphin stepped in on a surfer's wave in Australia to show him exactly how it's done - and the special moment was caught on camera.

Pro surfer Soli Bailey was hitting the waves off the Yorke Peninsula in South Australia when the dolphin decided to upstage him.


The footage of the cool moment was shared online and has now gone viral.

The stretch of coast is known to be populated by sharks so it could have been a bit unnerving at first.

However, Soli said he thought it was "amazing".

According to the Metro and the Daily Mail, he said: "I think it is the most amazing and beautiful thing ever happen to me surfing.

"I have never come this close to a dolphin on a wave, and to catch that on camera was incredible.

"The dolphins were hanging around all morning so while it did feel a bit sharkey it wasn't too bad."

However, he added that it could have been a less positive experience if they had hit each other.

"If I had hit him it could have been really bad.

"With the speed I was going and the weight of the dolphin we both would have been injured."