2015 Lamborghini Huracan for sale with the reserve price of 69p 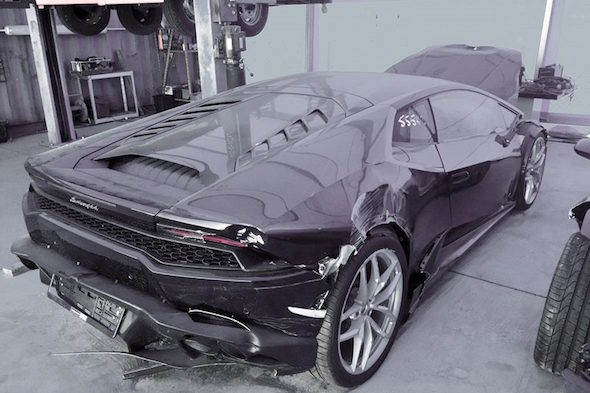 A Lamborghini Huracán has come up for sale on a New Zealand auction site with a reserve price of less than £1.

The 2015 model boasts under 620 miles on the clock and is finished in the sleek colour option of 'Midnight Obisidian' – i.e. black. The powerful 10-cylinder, 5204cc engine is coupled with an automatic transmission, and the model can reportedly reach 62mph in just 3.2 seconds, before topping out at 202mph.
However, the supercar, which retails for around £170,000, isn't as great a bargain as it sounds. An unfortunate off-road crash has left it a write off, with almost every panel featuring multiple dents and scrapes.

The Huracán is being sold by Auckland-based Star Auctions on behalf of an insurance company, and is offered as part of the auction site's $1 reserve sale.

In the listing, on website trademe.co.nz, the car is humorously described as: "Nearly unrecognizable in this remodelled version, this Huracán looks like it has been through its namesake" (Huracán is Spanish for Hurricane).


While the car will need a lot of hard work before it is road-worthy once again, on the plus side the engine does start, as demonstrated in a video uploaded to Dropbox by the auction house.

Numerous comments on the listing range from requests to view the car, to the less serious question of "Do u think this will buff out?".

Bidders in the auction, which ends on Wednesday, are advised to read the description carefully before getting involved.
Tags
Read Full Story