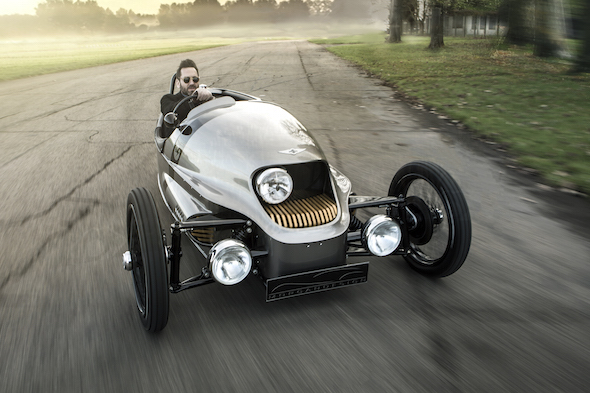 Morgan Motor Company, which is famed for its classically styled three wheelers, has revealed its very first electric model.

Remaining remarkably true to the carmaker's traditional British craftsmanship, the final pre-production phase EV3 was revealed at the recent Geneva Motor Show and is set to begin production in the latter half of 2016.
The EV3 takes inspiration from 1930's aero-engine racecars, classic motorcycles and 1950's fantasy automatons. It is the first of the brand's vehicles to utilise composite carbon panels in its body construction, which similarly to the aluminium panels, are worked over an ash wood frame.

Weighing less than 500kg, the lightweight three-wheeler is powered by a 20KWh Lithium battery, which drives the rear wheel via a liquid cooled 46kW motor. It is able to travel up to 150 miles on a single charge, an impressive range that puts it on a par with Nissan's all-electric Leaf.


Price and performance figures are not too far removed from the brand's conventionally-powered petrol three-wheeler, with 0 – 62mph acceleration taking less than 9 seconds, and a top speed of 90mph. The internal combustion model can reach 62mph in 6 seconds, and has a top end of 115mph.

Managing Director of Morgan Technologies Ltd Steve Morris commented on the new model: "The EV3 is an exciting opportunity for our customers to enjoy the unique Morgan driving experience and the joy of tailored manufacture whilst remaining conscientious towards the future of our planet."