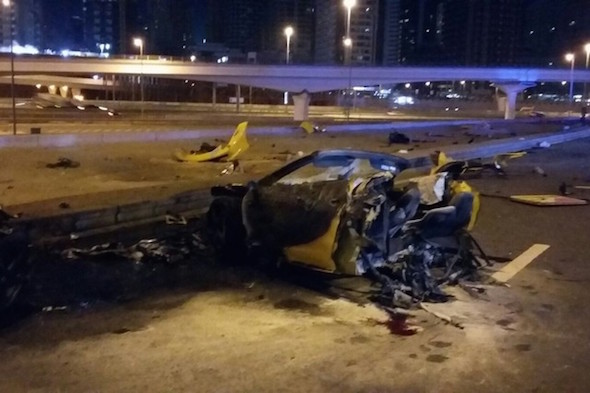 Four people including a Canadian boxer lost their lives in a Dubai car accident over the weekend.

Toronto boxer and world traveller Cody Nixon had rented the two-seater Ferrari 458 Spider along with another man, believed to be his cousin.
The two men and two women were travelling in the bright yellow sports car along Al Sarayat Road at Jumeirah Lakes Towers when the driver lost control and caught a pavement, which flung the high-powered car into a lamppost with such force that the vehicle was split in half.

All of the occupants were thrown from the vehicle and killed in the crash, which took place at around 12:30am yesterday, according to Dubai Police.

Director of Dubai Police's General Department of Traffic, Col Saif Al Mazrouei said the driver was driving recklessly on a road with a 60kph limit.

Nixon was documenting his world travels on his Instagram account 'travelwithcody', and only hours before had posted a photograph of himself standing in the topless Ferrari with the caption: 'Just landed into Dubai, picked up the Ferrari! Don't worry I won't speed ;)'.

Just last week he had shared a video entitled 'Live everyday as it was your last', and had previously commented 'Live today, die tomorrow' on photographs of extreme pursuits including skydiving and jetskiing.

Oshawa's Motor City Boxing Club, where Nixon had trained regularly before embarking on his world trip, posted a tribute on its Facebook page.