Driverless lorries to be tested on UK motorways 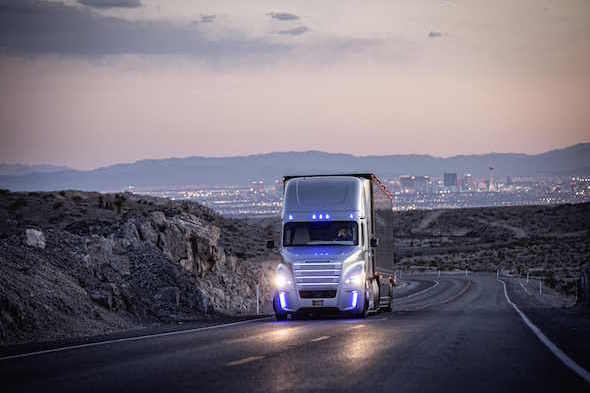 Chancellor of the Exchequer George Osborne is expected to announce the funding of driverless lorry testing in next week's budget.

The initiative, which would take place on a quieter part of the motorway system, would involve the lorries being organised into convoys with a real driver at the front to guide them.
According to The Times, these tests would take place in Cumbria, with the aim of improving efficiency and delivery time, as well as reducing the risk of accidents involving HGVs.

After a successful test in Germany by Daimler last year, which featured a "highway pilot" system that scanned the road with radar and cameras, it is said these autonomous systems won't replace but help lorry drivers on long journeys.

President of the AA Edmund King was sceptical and told the BBC: "The problem with the UK motorway network is that we have more entrances and exits of our motorways than any other motorways in Europe or indeed the world.

"Therefore it's very difficult to have a 44 tonne 10-lorry platoon as other vehicles need to get past the platoon to enter or exit the road."

A spokesman from the Department of Transport said: "New technology has the potential to bring major improvements to journeys and the UK is in a unique position to lead the way for testing of connected and driverless vehicles.

"We are planning trials of HGV platoons – which enable vehicles to move in a group so they use less fuel – and will be in a position to say more in due course."