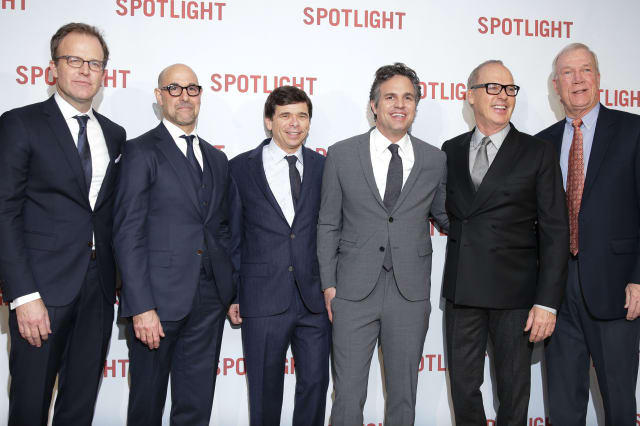 Spotlight triumphed at the Oscars last night - snatching the Best Picture Oscar from under the nose of hotly-tipped The Revenant. But while the filmmakers may be patting themselves on the back for producing a critically-acclaimed, award-winning movie - inspiring comparisons to Citizen Kane and All The President's Men - they really ought to be kicking themselves. Because in terms of Oscar bangs for their bucks, it has fallen short of some of the film triumphs of the last decade.

A study by Music Magpie revealed that the best 'value for money' winner of the Best Picture Oscar in the past decade was Slumdog Millionaire, which was made on a budget of roughly £10.4 million, garnered 10 nominations and 8 Oscars in 2009 - and so works out at a cost of just £1,297,000 per Oscar.

It's a lot to pay for a little gold man (and an incredible film). However, studies have shown that it could still pay off for the filmmakers. Spotlight has already been out for 17 weeks, and is available in the US on DVD, so you could be forgiven for thinking that there's not much more it can make at the box office as a result of the win.

Given that the film would therefore have made back twice its production budget at the box office, there's every chance that the studio is reasonably happy with this result.

It may have paid more than most for its Oscars, but it is still set to make a small fortune - in addition to being one of the most lauded films of the year, and raising an issue that Michael Sugar, a Spotlight producer, said he hoped would "resonate all the way to the Vatican."

10 PHOTOS
The most overpaid actors of 2013
See Gallery

Spotlight falls short in value-for-money Oscars race
Pride of place on this list goes to the star of Jack and Jill, who is said to fetch up to $15 million per film, and is not pulling in the crowds the way he once did. That's My Boy didn't do him many financial favours (taking $57 million at the box office after spending a budget of $70 million), and this research was done before the relative success of Grown Ups 2 could be factored into the sums. In the end the films made a paltry $3.40 for every dollar he was paid.
Second place on the list goes to comedy star Heigl, who was dragged into the list because the money she could command after making hits like 27 Dresses were poured down the drain on the financial disasters: Killers and One for the Money. Her films made $3.50 for every dollar she was paid. Shockingly this is her second year at number 2 - last year she returned $3.40 for every dollar she earned.
Witherspoon felt the effects of Water for Elephants and This Means War. Her films made just $3.90 for every $1 she was paid. Sadly this was exactly the same position she held last year - when she returned exactly the same sum per dollar.
Cage made a return of $6 for every dollar spent on his fee. This wasn't helped by the shocking performance of Ghost Rider: Spirit of Vengeance.
The comedy actor was previously one of the best value for money, but took a major hit with Here Comes the Boom. Who would have guessed that a film about a teacher who tried to raise money for his school by becoming a mixed martial arts fighter wouldn't be an enormous hit? He returned just $6.10 for every dollar spent on his fee.
It's a shocking name for this list, but his films made just $8.30 for every dollar spent on Washington. He made some pretty bankable films during this time too, including Flight and Safe House. It just goes to show the effect that a massive fee can have on your value-for-money ratings.

The Incredible Burt Wonderstone has a lot to answer for here. It made just $22 million at the box office, so Forbes has calculated that he returned just $10 for every dollar spent on his fee.
Her films made $10.60 for every dollar spent on her fee. She still commands huge fees for her work (estimated at $5 million), and the return certainly wasn't helped by the relative failure of Wanderlust, which only took $22 million at the box office.
Joint eighth with Aniston, making $10.60 for every $1 spent on his fee, this is quite a come down for the Bourne actor. However, it's a reflection of the fact he commands large fees, and chose to star in films which were never going to draw Bourne-sized crowds - like Behind the Candelabra.
His films made $10.70 for every $1 he received. Green Lantern didn't do him any favours - becoming one of the worst-performing superhero movies ever. It will come as no comfort at all to Reynolds that he's likely to find himself here again next year - after his summer blockbuster RIPD became one of the biggest flops of this year (and was released after the period the researchers were looking at).
Up Next