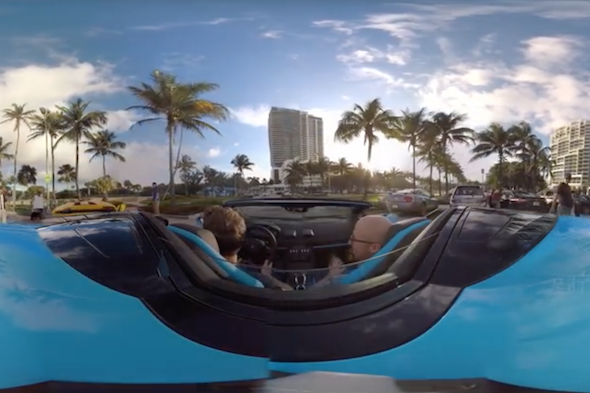 The 2016 Lamborghini Huracán Spyder is soon to become the reserve of the rich and famous, however a 360-degree video by YouTube channel Kelley Blue Book has allowed the rest of us to get a look at the super exclusive supercar - and the reactions of the people who see it.

The video, which was filmed using a 360-degree camera placed behind the cockpit of the car, shows the sky blue beauty speed through the streets of Miami, attracting admiring glances and comments from onlookers.
In response to a cheer at a set of traffic lights the car's driver, Micah Muzio, revs the 602hp Lamborghini, producing an ear-splitting roar from its 5.2-litre V10 engine.

Even in South Beach, the Huracán Spyder stands out, despite the area being notorious for its concentration of fast and luxurious cars.

The video was made as part of a review and road test of the 2016 model by Kelley Blue Brook, a California-based vehicle valuation and automotive research company.