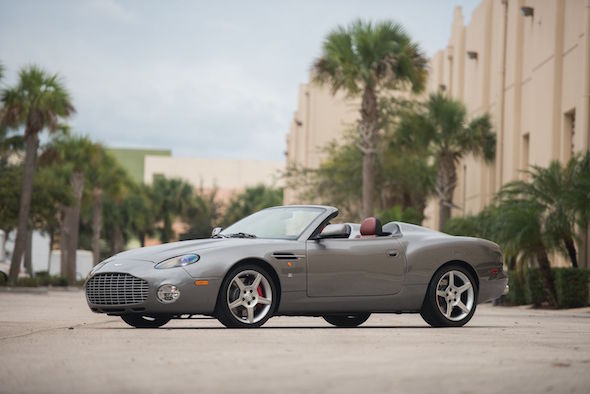 Credit: RM Sotheby's
One of just 99 Aston Martin DB AR1 supercars is due to be auction off by RM Sotheby's.

It was produced following a great amount of interest in the DB7 Zagato. However, as this wasn't available in the US, another model had to be created to cater for the American market.
This particular car is number 89 of 99, and has just 700 miles on the clock despite being 13 years old.

Finished in Tungsten Silver, the DB AR1 also features a red interior and is sold complete with its original umbrellas, seat covers and tonneau cover.

When it first went on sale, the special Aston Martin – which was designed by Italian design house and coachbuilder Zagato – cost just under £180,000. The cost of this car though is surely going to be higher, given its history and near-classic status.


It features a V12 engine that produces 435bhp, sent to the road through a six-speed manual gearbox. Capable of hitting 60mph in just 4.9 seconds, the DB AR1 could reach a top speed of 189mph.

The remarkably styled bodywork came to be after a partnership between Andrea Zagato and Aston Martin's then-chief designer Henrik Fisker. Modelled on the existing DB7 platform, it was designed to be easily recognisable to either Aston Martin or Zagato fans.

With its distinctive style, the DB AR1 is regarded as one of the best designs that Aston Martin and Zagato have ever produced. As well as looking the part, it incorporates a folding fabric roof, meaning that both driver and passenger can enjoy the soundtrack from the Aston's V12 engine in the open air.
Tags
Read Full Story