Ireland not interested in Jones sideshow ahead of Twickenham test 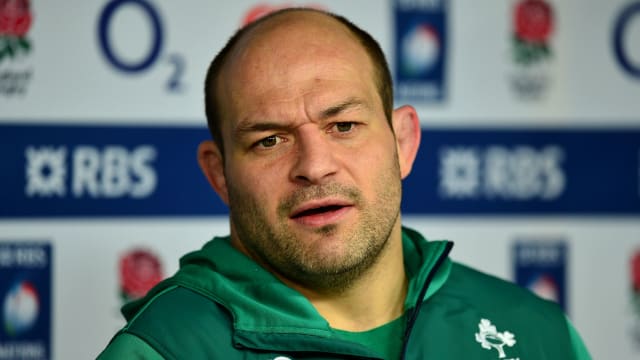 Rory Best says Ireland have no interest in the "sideshow" of Eddie Jones' comments over Jonathan Sexton's welfare ahead of Saturday's Six Nations encounter at Twickenham.

England head coach Jones engaged in the mind games again this week by questioning whether it was wise for Ireland to pick inspirational fly-half Sexton, who suffered a whiplash injury in a brutal defeat against France.

Jones said Sexton's parents must be worried about their son's wellbeing given that he has suffered with repeated concussions in recent years and the Australian stated that England will target the number 10.

Ireland captain Best said the Six Nations champions are paying no attention to what Jones has to say as they eye a first victory of the tournament and aim to end England's 100 per cent record.

"There are a lot of things going on in the media, we have enough going on with our own stuff," said Best.

"We're not worried about that. We've got to make sure we're as close to perfect as we can be.

"Everything else apart from the rugby is a sideshow that we don't want to get involved in. All we know is that Johnny's a quality player."

Saturday's match will be England's first at Twickenham since their hopes of qualifying for the knockout stages of the World Cup were ended by Australia last October.

Jonathan Joseph, who scored a hat-trick in the hammering of Italy last time out, knows the importance of England repaying the fans in what will be Jones' first home game in charge.

"Representing your country is always a great moment, a special moment you have with yourself. I can't wait to get back out there," said the centre.

"The home crowd, having the family there, friends there, it means everything to us and spurs us on that little bit more."

He added: "Putting right what we did wrong is exactly what we want to do. We owe it out there to everyone who supports us.

"We owe it to ourselves also, we didn't do ourselves justice so the Six Nations is a great chance to do that."

Lock Maro Itoje will make his first England start in place of the injured Joe Launchbury, while Joe Marler is preferred to Mako Vunipola at loosehead prop.

Centre Stuart McCloskey and flanker Josh van der Flier will make their Ireland debuts, while lock Ultan Dillane is also poised to make his international bow off the bench.

- England have won their opening three games in a Six Nations tournament on five previous occasions, going on to win the title four times.
- Only three times before have Ireland lost consecutive matches in the same Six Nations tournament (2013, 2008 & 2005).
- Owen Farrell needs six points to become the third player to score 200 Five/Six Nations points for England (Jonny Wilkinson and Paul Grayson are the others) and the 14th player from any nations.
- Jonathan Sexton (259) needs 12 points to overtake David Humphries (270) as Ireland's second-highest point scorer in Five/Six Nations history.
- The top two ball carriers after two rounds of this tournament will go head to head in this match; CJ Stander (42) and Billy Vunipola (41).