Would you spend the night in a shed? Airbnb launches 'shedcations' 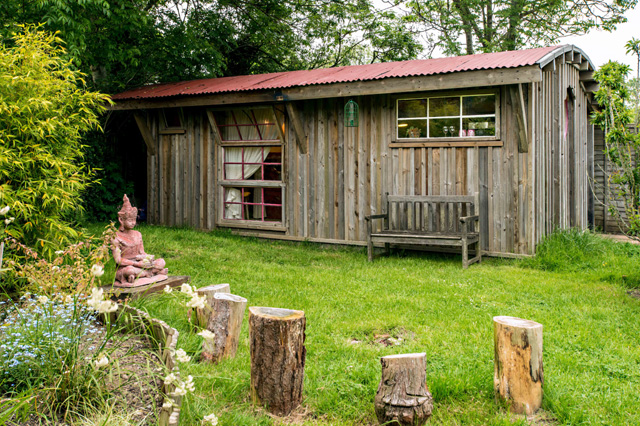 Adventurous Brits can now book a 'shedcation' thanks to Airbnb and the 2016 Shed of the Year sponsors Cuprinol.

To launch the annual Shed of the Year competition, Britons have been given the chance to book a stay in some of the UK's most spectacular sheds.

SEE ALSO: A night in Paris Catacombs: The scariest accommodation offered by Airbnb

The shed 'wishlist', which has been curated by founder of Cuprinol's Shed of the Year, Uncle Wilco, is encouraging people to book a stay at a number of sheds through the Airbnb website.

Quirky sheds listed on Airbnb range from the repurposed 'Corrugated Cottage', which dates back to 1940 and was originally built for the land girls who supported Britain's agriculture industry during WWII, to the 'Boatel', a unique shed created out of an upcycled boat. 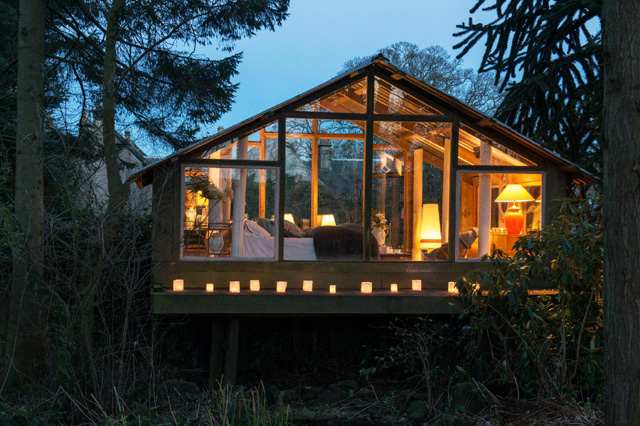 Guests can also bob to sleep on the 'Maid of Dekkin', Surrey's finest floating shed, take a dip in the Night at The Museum's private pool or relax and detox in 'Gilly's Hut' therapy retreat, complete with a double cabin bed and en-suite bathroom.

It comes as a recent report revealed that nearly 70% of Brits would rather stay in a shed than a cottage, caravan or tent for a country retreat - with the youngsters of Britain (25 to 34 years) most likely to choose a holiday in a shed over other forms of accommodation (76%).

The shedcation is a trend that is fast gaining momentum as UK shed listings on Airbnb have increased by 88% year on year. 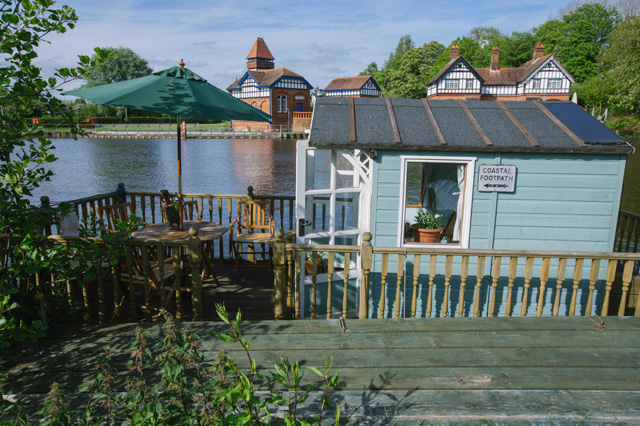 More than two thirds (63%) of Brits now own a shed and 44% of those who don't own a shed, would like to. In fact almost two thirds (62%) stated that they would be put off buying a home that didn't have a shed or garden big enough to house one.

Katie Taylor, brand manager at Cuprinol said: "Since the start of the competition we've certainly seen a trend towards people viewing their garden shed as an extension of their home and more people are finding amazing uses for their sheds which goes beyond DIY. 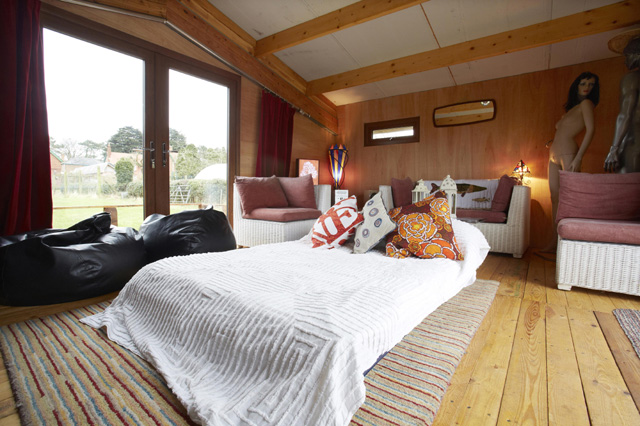 "From garden offices to shed hotels, we want to give people the chance to experience exactly what makes these sheds so special - the care that goes into them and the people that dream them up."

Would you spend the night in a shed? Airbnb launches 'shedcations'

Prefer your Martinis shaken, not stirred? Situated on the prominent Gaeta peninsular along the desirable central lake of Como, guests can enjoy staying in this wonderful lakefront location in the famous Villa Gaeta, a stunning Liberty-style villa used in the James Bond movie Casino Royale. Relive every step 007 has taken and even dream of popping round to the Clooneys for afternoon tea in this idyllic paradise. San Siro Apartment, within the villa, sleeps two people from £97 per night with holidaylettings.co.uk.

Derbyshire’s White Edge Lodge, located on the edge of White Lodge Moor, appears in the 2011 film adaptation of Jane Eyre. It stars as Moor House, where Jane worked as a teacher. Originally the gamekeeper’s cottage it has many interesting and original interior features including a kitchen in the former game cellar and a beautifully designed bathroom with fine moorland views from the bathtub. The cosy cottage sleeps five people in two bedrooms, from £475 for three nights with National Trust Holidays.
This secluded villa first featured in the Entourage movie when Ari called Vinnie Chase about his first movie investment. Located in the celebrity-filled hills of Los Feliz, The Villa Sophia offers panoramic views of LA's downtown skyline, a heated outdoor pool and an alfresco living area. The one-bedroom villa sleeps four people and is available to rent from £2,287.59 for seven nights with booking.com.
This once ancient watch tower featured in Quantum of Solace as the home of retired MI6 agent Mathis who is visited by James Bond, who needs help tracking down villain Dominic Greene. With superb views of the Tuscan coastline and surrounding scenery, Villa Orizzonte is a truly special film location. You can relax on the terraces, in the pool area and enjoy walks down to the sea. The villa sleeps 12 people in six bedrooms and is available from £788 per night with holidaylettings.co.uk.

Perched high on the cliffs on the sheltered, south coast of Cornwall, Porthpean House is set amidst acres of tranquil gardens, just 50 metres above sandy Porthpean beach. The Grade II listed house has a rambling magical quality that made it the perfect location for the latest Richard Curtis film About Time, a time-travelling romantic comedy starring Bill Nighy, Rachel McAdams and Tom Hollander. The house features Charlotte’s room, a double bedroom with an exquisite sea view that is also home to the 'time-travelling' wardrobe from the film. Porthpean sleeps 20 people and is available to rent from £1,850 for a weekend from The Big Domain.

Used as the hideout for Hector Gonzales and where Bond girl Melina Havelock later gets her revenge in For Your Eyes Only, Villa Sylva in Corfu over the Ionian Sea and famous Pontikonissi. The villa sleeps 12 guests in the main house and four guests in the guesthouse. It features sun-drenched terraces with views, ideal for entertaining and barbeques, as well as a seawater swimming pool, large pool house, gym and outdoor bar. Villa Sylva is available to rent from €3,600 per night with Le Collectionist. The rental includes a private chef and daily housekeeping.

This five-bedroom Tuscan villa sits conveniently with Chianti to the north and the beautiful Val d’Orcia to the south, providing views reaching over to the medieval city of Siena. The gardens and their backdrop were chosen for scenes in Bernardo Bertolucci’s 1996 film Stealing Beauty, starring Liv Tyler, Joseph Fiennes, Sinead Cusack and Jeremy Irons. The villa is a fusion of contemporary meets classical, with modern furniture and art beautifully combined with antiques, travertine, oak beams, terracotta floors and stone. Podere Belpoggio sleeps 10 people and costs from £10,779 per week with Red Savannah.

The film Miss Potter starring Renée Zellweger, Ewan McGregor and Emily Watson was filmed at Yew Tree Farm in Coniston, and was based on the story of Beatrix Potter. The author bought Yew Tree Farm in 1930 and it featured as her 17th century farmhouse Hill Top in the film. The property, which sleeps six people, has Beatrix Potter's own dining table and boasts open fires, oak floors and a newly fitted kitchen. The Lake District farmhouse can be rented from £468 for one week with Heart of the Lakes.

Located in Somerset's Blackdown Hills, Dimpsey Hut is set on a small farm and offers a luxury glamping experience, with a double bed, seating, kitchen area and bathroom. While the green hut featured in Far from the Madding Crowd, starring Carey Mulligan, cannot be stayed in, guests can enjoy afternoon tea or watch a film inside. The interior of the hut also has Carey Mulligan's signature. Inside Dimpsey Hut, where you can sleep, there is an oak table and bench, a sofa area and the kitchen has a gas hob, fridge and small Belfast sink. Dimpsey Hut is available to rent for £115 per night, with a minimum two-night stay.

Villa Nocciola had the starring role, alongside Diane Lane, in the 2003 film Under the Tuscan Sun. The villa's ancient 17th century origins sit comfortably alongside its 21st century rejuvenation which includes WiFi, air conditioning and en-suite bedrooms. It sits within a short walk of the beautiful Tuscan town of Cortona, with its wealth of restaurants and other conveniences. The garden is fragrant with lavender and white roses, while the villa comprises two properties: a main house and an adjacent farmhouse, making it perfect for multi-generational families or those celebrating a special occasion in a majestic setting. Villa Nocciola has 10 bedrooms sleeping 20 people and is available to rent from £10,580 per week with Red Savannah.

English stately home Hedsor House, in Buckinghamshire, featured as character Marisa Coulter's house in the 2007 fantasy-adventure film The Golden Compass, starring Nicole Kidman. The Centre Hall at Hedsor House was Marisa's Living Room and the carpet that graces it was also in the film. The luxurious bedrooms are nestled on the first and second floors, providing a beautiful blend of period style and modern facilities. You can enjoy exclusive hire of the property from £11,850 for up to 22 people.
Up Next