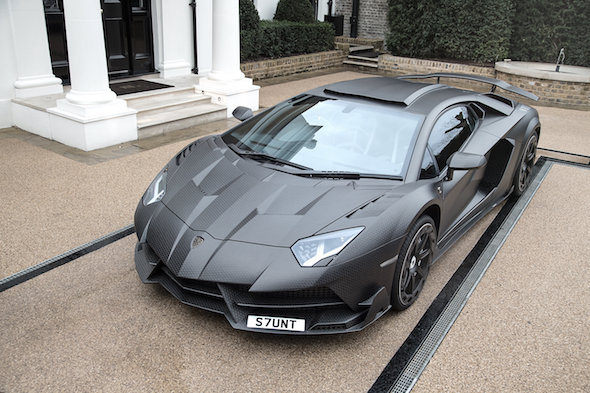 The £3.1 million Aventador can do 0-60mph in just 2.7 seconds, and can reach a top speed of 220mph.
The Aventador has been customised by German firm Mansory. The interior has been completely customised, with 'J S' embroidered on the seats and transmission tunnel. This car is the 21st that Stunt has ordered from the customisation firm.

It joins his already formidable collection, which includes Range Rovers, Rolls-Royces and Bentleys. Stunt is well-known for his art collection, and regularly frequents auction houses around London.

Stunt's father-in-law is Formula One boss Bernie Ecclestone, who is equally well-known for his taste in art.

This particular Aventador features a redesigned front end that gives the Lamborghini more downforce at higher speeds. It also comes with a completely new exhaust system, which includes a new manifold, muffler and tailpipes. A more powerful rear spoiler adds to the aerodynamic package.

A greater use of carbonfibre helps keep the Lamborghini's weight as low as possible, while the gullwing doors add to the supercar's appearance when stopped.

A spokesperson for Mansory told the Daily Mail: "Someone like Stunt is constantly on the lookout for something special owned by no one but him.

"The J.S.1 Edition by Mansory is covered by a tailor-made carbon fibre shell that meets the highest demands on looks and aerodynamics – and meets in full the strict demands of James Stunt."