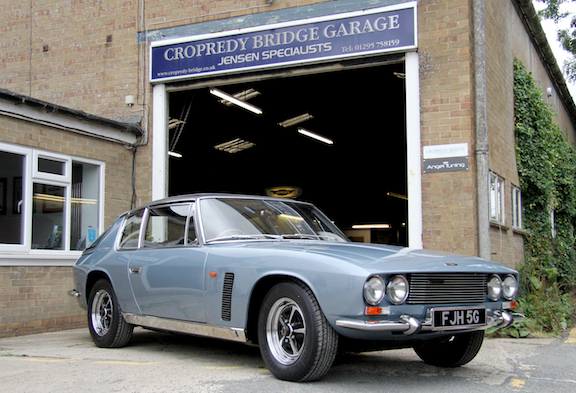 Photo credit: Silverstone Auction
A Jensen Interceptor owned by the legendary comedian Eric Morecambe is expected to fetch £150,000 when it comes up for auction soon - almost £145,000 more than he paid for it in 1968.

The Interceptor, which was owned by Morecambe up until his death in 1984, has undergone an extensive programme of restoration – and was recently displayed at the London Classic Car Show. It now carries an estimated value of £150,000.
The repairs to the car have been extensive, with changes made to the engine, brakes, body and exhaust.

Morecambe - one half of the legendary comedy duo Morecambe and Wise - is believed to have been extremely fond of the car, and was behind the wheel when he suffered his first heart attack in November 1968.


The comic did suffer some problems with the car after purchase, with a correspondence to Jensen Motor Company saying: "Whilst bearing in mind that even the best chrome does not last for ever, the car has not had much use as the mileage is now only fourteen-and-a-half thousand miles and has always been kept in a garage.

"As for the paintwork, I would refrain from comment, but would say it is not what I expect of a £4,500 motor car."

The Jensen Interceptor is one of the most iconic British sports cars of all time, with just 6,408 cars produced in its production run between 1966 and 1976. All were made of a steel bodyshell, and the styling was created by Carrozzeria Touring of Italy. Underneath the Jensen's bonnet was a Chrysler-sourced V8 engine and was made famous by owners such as Tommy Cooper and Princess Anne.
Tags
Read Full Story Click here to comment