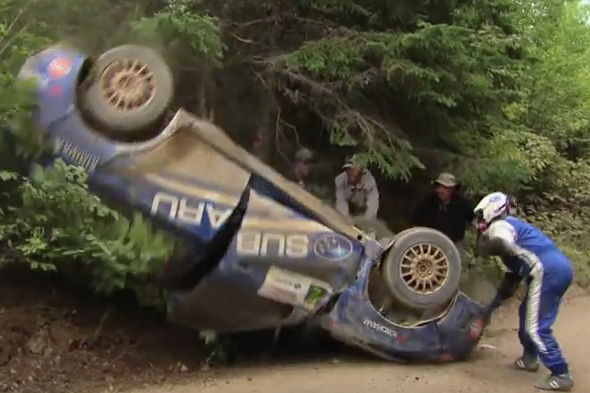 Footage has been released from the 2010 Rally Baie Des Chaleurs, showing a remarkable comeback from Subaru rally team Patrick Richard and Alan Ockwell after their Impreza car flipped over mid-corner.

Approaching a sharp right-hand bend, driver Richard takes the turn a little too closely to the apex, causing the car to be sent into the air and roll into trees at the side of the track.
As the in-car footage shows, the crash is quite severe – sending parts of the car flying across the track and forcing the occupants of the vehicle to cling on for dear life.

Amazingly, both driver and co-driver seem unwilling to give up, with Richard jumping out of the upturned vehicle to join spectators as they try to right the car.

They manage to get the car back on all four wheels, and Richard wastes no time in getting it started again and moving, despite the windscreen being badly damaged, among numerous other parts of the vehicle.

Travelling at top speed with a broken car, the team manage to narrowly clinch the title, crabbing across the finish line.

Should I cut ties over my friend&#39;s seemingly homophobic comment?