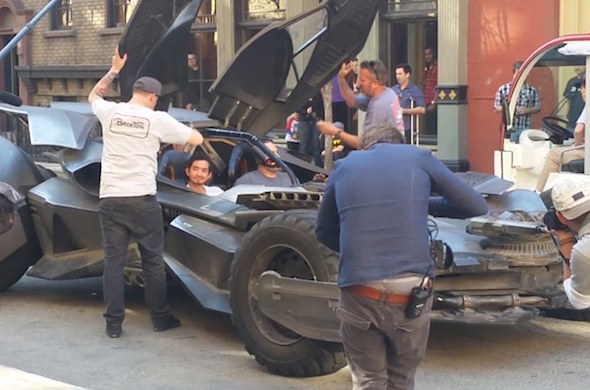 Credit: TMZ
The new Batmobile will soon make its on-screen debut in Batman vs Superman - soon followed by Suicide Squad after that - but until now we haven't had a proper look at Bat's latest wheels of choice.

The Dark Knight's new chariot appears to be an evolution of the Tumbler, which featured in director Christopher Nolan's trilogy. Now a little lighter and sportier, it seems the Batman is looking for speed over sheer brute force, even when driving around the streets of Burbank.
The movie's designer's appear to have succeeded in avoiding making it look like a vehicular Mad Max rip off, although it still features tractor-sized tyres with guns, cannons and armour plating sprouting from almost every surface.

Filming duty complete, the new Batmobile is purported to be out and about on promotional grounds.

Getting it around those Californian streets may be difficult though.