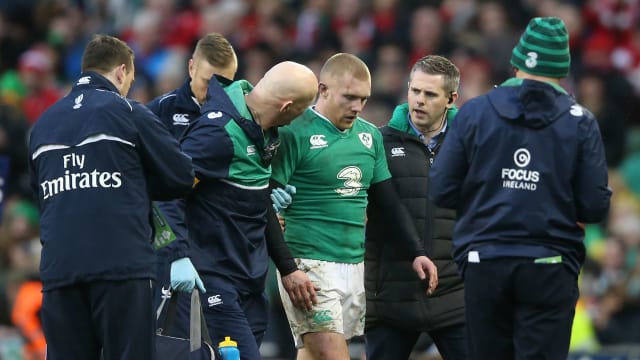 Simon Zebo and Keith Earls have both been omitted from Ireland's squad for the Six Nations clash with France on Saturday due to injury.

Full-back Zebo is unavailable because of a knee problem while a head injury keeps wing Earls out of contention for the match at Stade de France.

Rob Kearney and Dave Kearney come into the side in place of the pair, while Sean O'Brien returns at flanker for Tommy O'Donnell after missing last Sunday's 16-16 draw with Wales because of a hamstring issue.

Asked about Zebo and Earls, coach Joe Schmidt told a media conference: "They got through training at the same time [but] we just felt they weren't probably 100 per cent fit.

"His [Zebo's] knee was just a little bit sore and he couldn't stretch out fully. We decided to err on the side of caution with Keith. He's got to do his last step of that [head injury assessment] tomorrow [Friday] and we have to name a team today."

Jonathan Sexton features despite picking up a knock in the stalemate with Wales and is wary of a France side that began the campaign with a 23-21 win over Italy under new coach Guy Noves.

"I'm ok now, I just got sort of banged on top of the head. Compressed my neck a bit but I've turned it around and I'm ready to go," Sexton said.

"We've only had one chance to see them [France] under new management, we've seen hints of what they're capable of. They've got pretty dangerous guys across the backline.

"They're going to be a handful, we've prepared really well for it. We've won twice ever in France, I don't think you can ever go to Paris confident. It's one of the toughest places to go in international rugby."