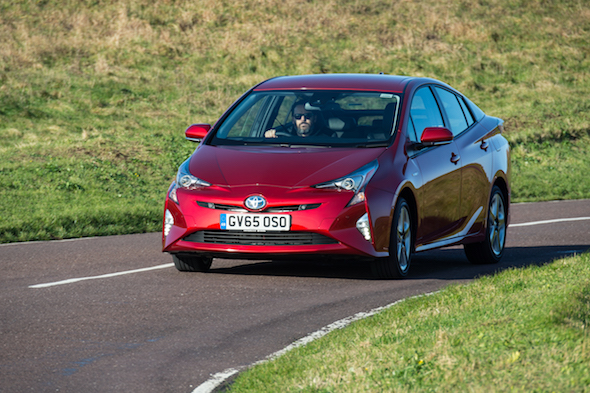 The Toyota Prius has been the go-to low-emissions vehicle for some time now. This latest incarnation is there to push the car further into the future, with higher levels of economy and efficiency. With greater amounts of equipment onboard, can the Prius still deliver ultra low-emissions driving? AOL Cars finds out.

If ever there was a car trying desperately to make some new friends, it's this one. The Prius might now have its fair share of fans after three generations and a grand total of 18 years on sale – particularly among London's army of Uber drivers – but the poor thing also manages to be one of the most hated nameplates in the world; not for what it is so much as what it represents.
This new, fourth generation Prius probably won't be changing too many minds on that front – it's still a fuel-sipping, CVT-gearbox'd hatchback after all – but Toyota is hoping that a brand new platform and a sleek redesign will be enough to convert at least a few non-believers.


What's under the bonnet?

As before, you're looking at a 1.8-litre petrol engine hooked up to an electric motor using all manner of engineering wizardry. It's not just lifted out of the old model and into the new one though: the petrol engine, battery and electric motor have all been redesigned or heavily tweaked to make this the most efficient Prius yet – and that is sort of the point, after all.

In fact Toyota's engineering brains have managed to shave quite a bit off the old car's already frugal figures. Spec the smaller 15-inch alloys and the Prius can hit a faintly ridiculous 94.1mpg on the combined cycle and 70g/km CO2, meaning (at the minute at least) free road tax and even more crucially, no congestion charge in London. Those are the kind of figures no other 'normal' hybrid or diesel car can reach – only Toyota's smaller Yaris hybrid gets close.

Starting at £23,295 the Prius isn't particularly cheap, but you do get plenty thrown in – adaptive cruise control, LED headlights, keyless entry, dual-zone climate control, a reversing camera and a touch-screen stereo with DAB are all standard even on entry-level 'Active' trim.

Hand over more cash and, depending on the trim level, you'll find sat nav, an upgraded JBL speaker system, intelligent park assist and even a wireless phone charger – so no ground-breaking new tech, but plenty to help tempt you away from a Focus or Mondeo. 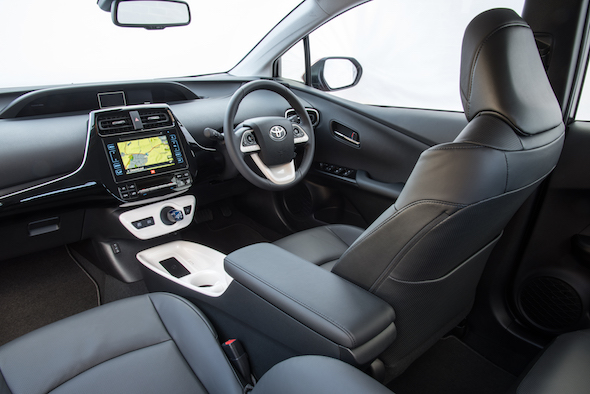 The big improvement over the old car is on interior quality. It all looks and feels pretty smart, and is lifted pleasantly by some white gloss bits here and there – miles better than the sea of grey plastic you'll find in the old car. Everything seems to be well screwed together too, and most switches have a relatively tactile feel to them. In fact, it feels a generation ahead of anything else in Toyota's line-up.

One letdown is the infotainment system – as it's entirely button-free it's fiddly to use and not that intuitive – while the two screens atop the dash, housing the speedometer among other things, are fussily designed and hard to read at a glance.

Until Kia and Hyundai's pair of Prius-sized hybrids turn up towards the end of the year, there's not really a direct rival for the Prius. Until then diesel version of the Golf and Focus are the closest on fuel economy and price, but can't match the Toyota on fuel economy around town and aren't as roomy.

First Drive: Toyota Prius
Up Next


Throw more money at the problem and you're open to plug-in hybrid options like the Mitsubishi Outlander PHEV and Volkswagen e-Golf. For regular, short-distance journeys they'd trump the Prius on fuel cost, but there's a larger initial outlay and you'll need access to a charging point to see any of the benefits.

Spoiler alert: it's still definitely a Prius. Fundamentally, most of the elements that irked thrill-seeking drivers on the old car are still there with this new one. The Atkinson cycle petrol engine hasn't improved much in terms of soundtrack, and the CVT gearbox means it still drones away in front of you under hard acceleration.

Aside from that though, the Prius is actually pretty good to drive. There's now fully independent rear suspension, bringing its handling more in line with that of its European rivals and – probably more crucially – softening the ride at the back by a fair margin.

More importantly though, the new platform means that not only can a lot of the Prius's heavy bits – like the battery – sit much lower to the ground, but the driver can too. That in turn lowers the centre of gravity, and means it no longer feels like such a tall and wobbly thing to fling around. 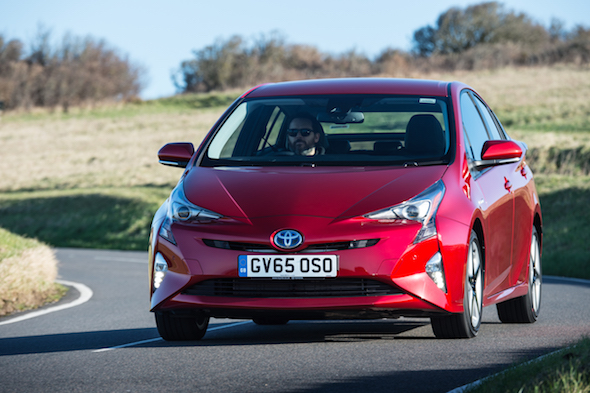 The steering has improved too: it's a quicker ratio, and Toyota has been kind enough to actually give it some more natural weighting this time around, while the brakes seem to be more progressive than on the old car too.

It's not as quiet on the motorway as some of its larger rivals – you can thank the lack of weighty soundproofing for that – but the Prius is still pleasant enough for long journeys. Wind noise is minimised thanks to Toyota's relentless streamlining efforts, and while the engine can get a bit rowdy with your foot down, it's less intrusive than in the old car.

Ultimately, the Prius still isn't a car set up for sheer driver enjoyment – quelle surprise – but this new generation car isn't half bad.

We like the way it looks, both inside and out, it's arguably a more interesting ownership proposition than the average diesel hatchback, and a vast improvement on the old car.

If you're after an easy to drive medium-sized car that sips fuel, the Prius is hard to beat – particularly if you spend most of your life stuck in traffic.