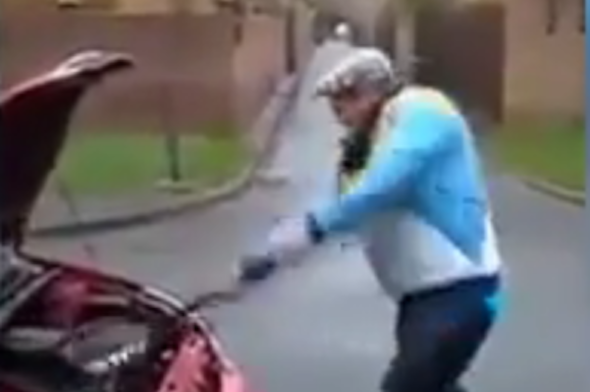 Credit: Idiot UK Drivers Exposed
An enraged motorist has been caught on camera smashing up his own car after it was clamped by the DVLA.

The unnamed driver, who forgot to pay his vehicle tax, attempts to punish the DVLA for clamping his car – by smashing it to bits.
He vents aloud, saying that "they [the DVLA] should have sent me a tax reminder at the end of the day. They want me to pay money to get this scrapheap out. Let me show you what I do with scrapheaps."

He then proceeds to puncture all four tyres with a flick knife, before taking the blade to the car's seats, slashing each one.

Before long the man turns his attention to the car's engine, opening the bonnet and attacking it with a sledgehammer.

Many have been quick to point out that although he's destroyed the car, he still has to pay the fine for unpaid vehicle tax. Not only that, but he will probably face an additional charge for removing the vehicle.

Please be aware, there is strong language in the video.

Mum hid daughter from strangers because of 'purple' birthmarks