Woman sees her parked car dragged away by lorry 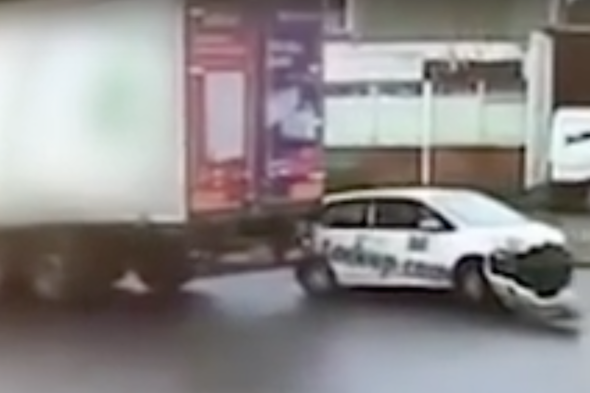 A woman who left her car parked near the gates of her work was unlucky enough to see it dragged away by a lorry that crashed into it.

Angela Thompson, 25, parked her VW Up! in the entrance to her work in an attempt to stop drivers who reversed into the driveway – damaging the gates on either side when doing so.
However, one driver who attempted a three-point turn got it slightly wrong and ended up hooking on to the vehicle and dragging it up the road.

Thompson told The Telegraph: "We keep on having to repair the gates when wagon drivers hit them so I've parked the car there deliberately for the last six months to stop them doing it.

"Obviously this one thought he could get away with it and turn anyway but he's ended up dragging the car with him and not even realising.

"I watched the whole thing through the window and almost knew it was going to happen. There is plenty of space further down where it could have turned."

Thankfully, Thompson was able to chase the offending lorry driver, and exchange insurance details with him.