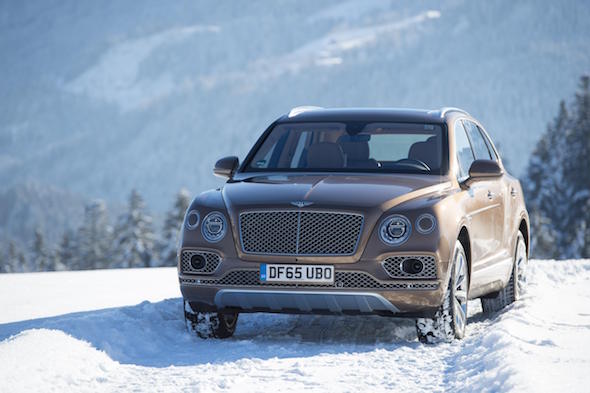 Bentley has given its all-new Bentayga SUV its Alpine debut at the site of the famous Kitzbuhel ski race in the Austrian Alps.

The Bentayga is the world's fastest and most powerful SUV in the world, and is set to further Bentley's already formidable reputation for producing the very best luxury vehicles.
The Bentayga's reveal in the Austrian Alps coincided with the famous ski race, with the car being placed at the bottom of the 'Streif' run.

Robert Engstler, regional director Bentley Europe, said: "We had a very strong year 2015 with Bentley growing our sales by 10 per cent in Europe to a total of 1,695.

"We were able to commit significantly to the success of our company and engage customers with Bentley vehicles.

New Bentley Bentayga revealed in Austrian Alps
Up Next


"We are on course for further growth in 2016, without compromising our exclusivity. In doing so, we will enhance our current retail network across Europe and enlarge our market presence by opening new locations.

"The all-new Bentayga will play an important role in our growth strategy."

Bentley has improved its market position with significant increases in popularity in countries such as Austria and Russia. A total of 10 new locations have been opened to customers worldwide, from Casablanca to Dresden.

The appearance of the Bentayga in the Austrian Alps marked the new car's official market-entry in Europe, with deliveries set to start soon.