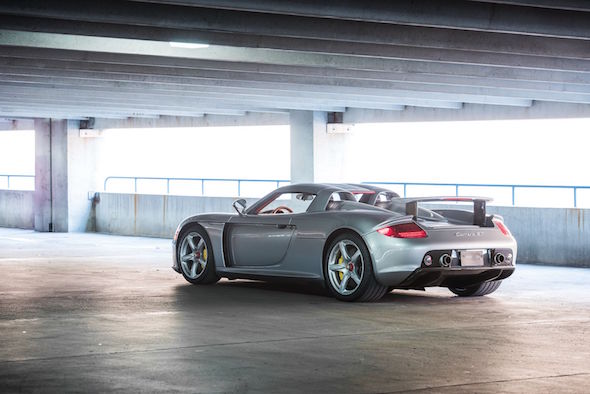 One of Porsche's most famous supercars has gone on sale in America – but is commanding a fearsome asking price.

The Carrera GT was one of the quickest cars ever made by the German manufacturer, and featured a 5.7-litre V10 that was derived from a race car.
This 2005 model is expected to fetch between £700,000 and £1 million when it goes on sale at a RM Sotheby's auction.

It has covered just under 1,600 miles since new, thanks largely to it only having one owner. The car also underwent a £20,00 service, and comes with an original seven-piece luggage set.

The interior is trimmed in red leather, which stretches across the seats, dashboard, transmission tunnel and steering wheel.

A number of components of the interior are finished in carbon fiber, too.

The Carrera GT was produced in the same year as the Ferrari Enzo and Mercedes-Benz, completing a trio of high-speed hypercars.

It was capable of reaching 62mph in just 3.5 seconds, and could carry on accelerating to a top speed of 205mph.

Despite being one of the fastest supercars of its time, it has already been surpassed by newer and more technically advanced vehicles. Porsche's latest hypercar, the 918, utilises a fully hybrid powertrain for the best possible performance and economy. Compared to the 918, this Carrera GT is a much more mechanical car.

This particular car is being sold as part of the Arizona auction, taking place on January 28.
Tags
Read Full Story Click here to comment