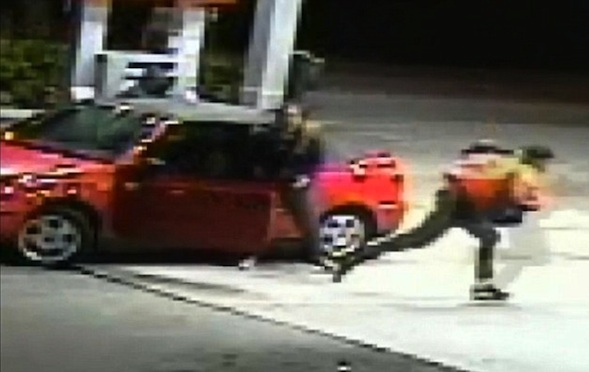 Credit: Caught on camera
An unnamed 21-year-old woman from Hialeah in Florida has fought off two carjackers who attempted to take her car which had her two children inside.

She is seen fighting off the two masked men - who had attempted to steal another car just moments earlier - and dragging one of the thugs out of the driver's seat.
The two men then flee to a getaway car, which sped off. This vehicle was later chased and apprehended by police. All three were arrested and placed into custody.

The three were identified as Juan Carlos Gonzales, 17, Nicholas Rosado, 19, and getaway driver Rebecca Utria, 21. According to WSVN, since Gonzales is classed as a minor he will appear in court today. Utria and Rosado remain in custody.

Police Sergeant Carl Zogby said: "She (the mother) wasn't going to let her children be taken, so she fought, she dragged the guy out of the car, and they both ran away like cowards."