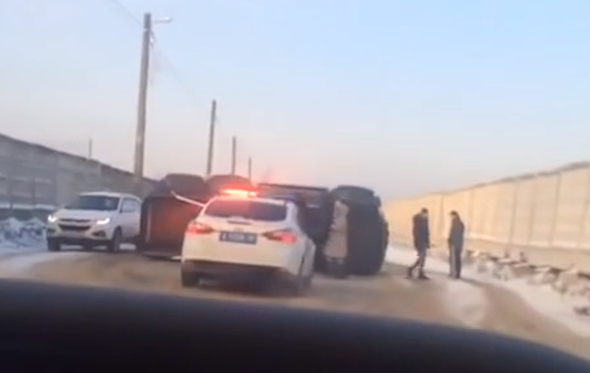 The Mercedes G63 AMG 6x6 is a six-wheeled, £370,000 leviathan – designed by the German carmaker to be the very best off-road car, while still keeping all the creature comforts of a luxury SUV.

With all six wheels driven by a twin-turbocharged 5.5-litre V8 with 536bhp, the 6x6 can reach 62mph in less than six seconds.
Not only that, but with 460mm of ground clearance and a 3775kg kerb weight, it is designed to be extremely stable across any surface.

It's strange, therefore, that a driver in Russia has been caught on camera having flipped one of them over.

The model featured in the video isn't just an AMG 6x6, but one tuned by Brabus – this particular car produces in the region of 690bhp.

There are no reports on how the car, filmed in Moscow, ended up in this position, but it is possible that the icy conditions could have played a part in the incident.