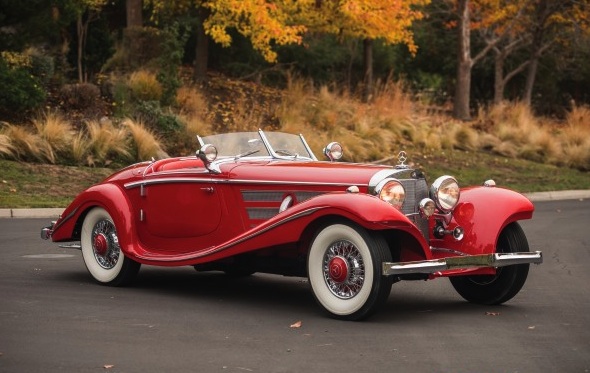 A 1937 Mercedes-Benz 540 K 'Special Roadster' could become the world's most expensive pre-World War Two car should it sell for its predicted price of almost £10 million.

When the Special Roadster first went on sale, it cost around £2,400 – nearly £150,000 today.
With a supercharged engine, the two seater convertible was capable of 105mph, an eye-wateringly high speed at the time.

This particular model was first delivered to Colorado socialite Reginald Sinclaire, who kept it alongside a fleet of other luxury cars such as Aston Martins, Bentleys and Dusenburgs.

Sold by Sinclaire in the 1950's, the car then passed through several hands, reaching the current owner in 1989. Despite this amount of travelling, the car has covered just 10,277 miles.

The Special Roadster is just one of six in existence, and is being sold by RM Sotherby's at its sale in Arizona at the end of the month.

Ian Kelleher, director at RM Sotherby's, told SWNS: "In the world of luxury automobiles, the 540 K is a car with few peers and effortlessly check all the boxes when it comes to collectability, namely extreme beauty, power and rarity.

"Very few Special Roadsters were built in the most desirable configuration of high doors, long tail, and factory left-hand drive, of which only six are believed to exist today.

"The fact that it is coming to market for the first time in decades makes its offering all the more special and sets the scene for an exciting auction."
Tags
Read Full Story Click here to comment