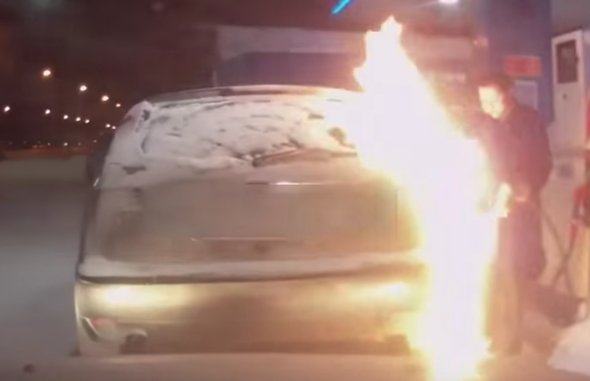 A woman has been caught on camera setting fire to her car's petrol tank while at a filling station in Siberia – after playing with a lighter near the vehicle's filler cap.

The strange incident was captured by the dash cam of a car parked behind, which sees the woman attempt to use her lighter near the car's petrol cap. She appears to try and defrost the frozen vehicle or check the fuel level.
The fuel tank eventually ignites and, despite the woman's best efforts to blow out the flames, continues to burn – spreading to the fuel nozzle as well as the rest of the car.

As the woman pulls away, the pump continues to deliver fuel down the pipe – sending a stream of flames to the floor.

Attempting to avoid the spreading fire, the driver of the camera car makes a swift exit out of the filling station in Surgut, a remote Siberian city near the Ob River.