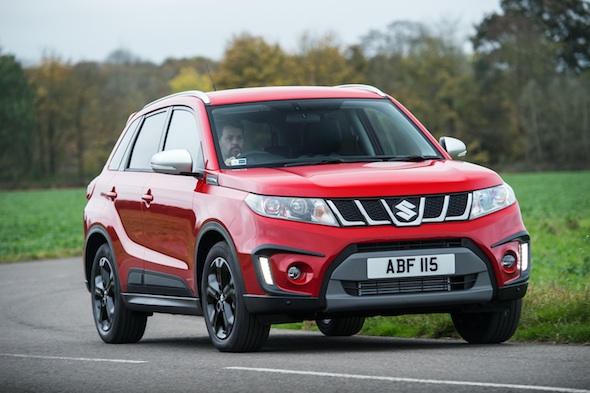 The Suzuki Vitara has enjoyed a large amount of respect as a surprisingly good small SUV. Suzuki hopes to build on this with its latest model, the Vitara S. Now incorporating greater passenger comfort and improved economy as well as retaining capable handling no matter what the conditions.

AOL Cars headed to Croft Circuit in Darlington, Yorkshire, to see if this latest Vitara is up to scratch.
What is it?

Suzuki's Vitara has long been the reserve of parents rushing on the school run. The latest generation of the compact SUV, released at the start of this year, is spacious and capable but lacking in variety, with the choice of only two engines. The introduction of the Vitara S looks set to change this, however. Boasting a new, more powerful petrol engine and sporty styling, the Vitara S is targeted at a slightly younger demographic than the standard model.

The Vitara S's 1.4litre Boosterjet engine follows in the trend of smaller capacity turbo petrol engines that is currently sweeping the automotive industry. This engine is Suzuki's first venture into such technology.

While small, the engine is not wanting for power and can accelerate capably both at high and low speeds, reaching 62mph from a standstill in 10.2 seconds and boasting a top speed of 124mph.
The 138bhp Direct Injection Turbocharged engine offers 41 per cent more torque than the 1.6-litre petrol engine found in the standard Vitara, while providing a four per cent improvement in fuel economy.

The Vitara S is a range-topping model, which means that it comes with many of Suzuki's safety and convenience features, including hill hold and descent control, rear-parking camera and automatic air conditioning. However, for the younger audience at which the model is targeted, the high price could make the car unattainable. A lower spec Vitara S would solve this issue, but Suzuki UK has confirmed that there are no plans currently in motion to produce one.


Seventeen-inch black alloy wheels, front and rear silver skid plates and a rear upper spoiler give the Vitara S a sporty appearance in keeping with its drivetrain.

Considering the high level of spec, the plastic surfaces in the Vitara S have a surprisingly cheap, scratchy feel, and lack the soft-touch appeal offered by rivals.

The Vitara S has a number of rivals in the compact SUV segment, namely the Citroen C4 Cactus and Jeep's recently launched Renegade. The S model sits in between the two in terms of price – a high spec Cactus costs around £19,000, while a top-end Renegade can set a buyer back as much as £27,000. One of the Suzuki's appeals is its more conventional appearance, as opposed to the blocky Renegade, and the Cactus which sports Citroen's AirBump technology.

On-track launches for AWD vehicles are becoming a common press stunt, although on the curves and chicanes of Croft Circuit the Vitara S's ALLGRIP 4-wheel Drive system, ABS and Brake Assist function along with its Electronic Stability Program come into their own. With only the slightest of scrabble after harsh acceleration, the Vitara sticks to the track surprisingly well for a high sided car.

The firmer suspension that is offered on the S does well to limit body roll in the corners, but also has a slight effect on comfort - the ride isn't as cosseting as that on the standard Vitara.

The Vitara S is a sporty alternative to Suzuki's popular compact SUV. Despite the slightly cheap feeling surfaces in the cabin, it's a bright and comfortable ride, with good all around visibility and a high ride height.

The BoosterJet engine is what really sets it apart from the standard Vitara. Despite an £800 difference between the S model and the high-spec standard model, drivers looking for a more exciting experience should look towards the S. Despite the small capacity of the 1.4-litre powertrain, the car is just as happy at motorway speeds as it is cruising around town, making it flexible enough for any journey.

Bishop ‘felt presence of slaves’ at Harry and Meghan’s wedding

Russian Grand Prix to be attended by 30,000 fans