Where the celebs go on holiday for Christmas and New Year 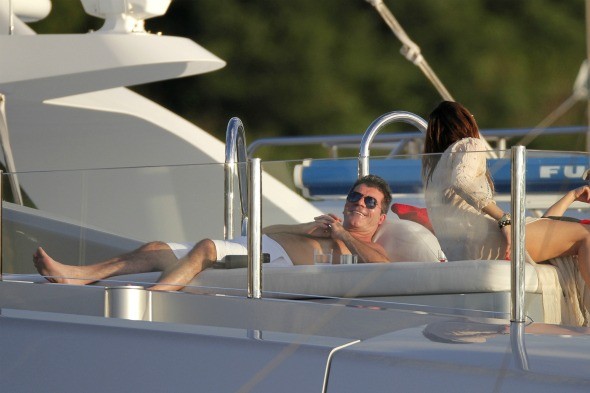 Want to know where the celebrities escape for Christmas and New Year? While we'll be in our woollies by the fire throughout the festive period, the likes of Simon Cowell, Kate Moss and George Clooney prefer the sunnier climes of the Caribbean, South America and Indian Ocean.

But where exactly do the A-listers, including the Beckhams and McCartneys, like to celebrate the holiday season? We've done some digging to bring you the hottest Christmas and New Year destinations where you can rub shoulders with Cara and mingle with Mariah.

See also: How to holiday like the rich and famous

Barbados is one of the most popular winter sun destinations among celebrities who like to go abroad for Christmas. Simon Cowell is a regular, staying at the exclusive Sandy Lane - as is Rihanna - while Mark Wahlberg and Sir Philip Green have also been spotted lapping up the sunshine on the island over the years.

See also: Pictures of your favourite celebs on holiday

The super-trendy set opt for the Middle Eastern heat of Dubai, where Gigi Hadid, Olivier Rousteing and Kendall Jenner partied until the early hours last year. Meanwhile, Brazil is a new favourite among the stars. Kate Moss and Naomi Campbell rung in the New Year in Rio de Janeiro last year. Kate was said to be so impressed by the city's New Year's Eve celebrations that she's returning with her friends this year.

While the party-loving stars jet off to the big cities, celebrity families, like the Beckhams, McCartneys and Afflecks, are known to escape the spotlight at this time of year and head to the pap-free havens of the Maldives, Anguilla and Montana.

Explore some of the A-list Christmas and New Year destinations below.

Where the celebs go on holiday for Christmas and New Year

Celebs love Barbados for a winter escape and the likes of Simon Cowell, Sir Philip Green and Rihanna celebrate New Year's Eve on the Caribbean island. Simon likes to stay at posh Sandy Lane, where he has been pictured jet-skiing, strolling the white sands with girlfriend Lauren Silverman and browsing art from local beach vendors. Rihanna returns to Barbados, where she was born, to spend Christmas with her family.

The Beckhams like to swap the cold British Christmas and New Year for the idyllic sands and sunshine in the Maldives. In 2012, David splashed out £250,000 for a family Christmas at the One&Only Reethi Rah. A source told The Sun that the priciest suite was booked for their 11-night holiday. Last year, they returned to the Indian Ocean for a New Year's getaway, where Brooklyn shared snaps of the exotic location on social media. Holiday like the Beckhams at One&Only Reethi Rah where you can enjoy dolphin watching, snorkelling and scuba diving with luxtripper.co.uk from £3,800 per person for seven nights including flights.

The parties, fireworks, beaches - Sydney is one of the hottest celebrity destinations to ring in the New Year, where the likes of Rebel Wilson, Alessandra Ambrosia and Sam Smith have celebrated this time of year in the sunshine. Sam was last year pictured climbing the Harbour Bridge before the New Year countdown, while Kelly Brook took to Bondi Beach to party.

A-list celebs including Jennifer Aniston, George Clooney and Lea Michele prefer to escape the limelight for the privacy of Mexico on their romantic Christmas breaks. In 2014, George and Amal invited Jennifer and Justin over for dinner at his house inside the gated El Dorado community in Cabo San Lucas. Singer Jessie J also hit the beaches of Mexico for a festive break and shared her Christmas Day snaps with her Instagram followers.

Kate Hudson, Mariah Carey and Antonio Banderas have all spent Christmas on the ski slopes at Aspen, opting for the snowy resort for a festive break with their families. The resort's celebrity pack are often spotted shopping, dining and skiing in the winter wonderland, as well as strutting through the town wearing fur and high heels.

Kate Moss appears to have fallen in love with Brazil and is reportedly returning to Rio de Janeiro with friends to celebrate the New Year for the second year in a row. While there, Kate can party with over two million other revellers as the city hosts one of the largest NYE celebrations in the world. According to The Sun, the supermodel will be jetting off to Rio with her new boyfriend Nicolas von Bismark's mother and has invited Fran Cutler, Sadie Frost and the Primrose Hill set to join her. Last year, Naomi Campbell and Victoria's Secret model Alessandra Ambrosio also spent New Year's Eve in Brazil.

While St Barths is the Caribbean island where the stars like to be seen at Christmas, neighbouring isle Anguilla is perfect for those who like to escape the paps on an exotic festive break. Paul McCartney, Beyoncé and Jay-Z have spent Christmas on this hidden gem, with the Viceroy Anguilla and Malliouhana popular hotels among the celebs. Home to some of the Caribbean's best beaches and superb dining, we can see why the A-listers choose to escape to Anguilla for Christmas.

For glitz, glamour and fun in the sun, the stars head for Dubai to celebrate Christmas and New Year in style. Gigi Hadid and Selena Gomez were pictured sitting on the beach outside the Jumeirah Beach Hotel in their New Year's dresses, where they were joined by fashion designer Olivier Rousteing and Kendall Jenner. The group partied on the hotel's private beach as they watched the fireworks overhead. Book a stay in the Beit al Bahar villas, where celebrities often choose to stay, from £1,650 per person for seven nights including flights with luxtripper.co.uk. The villas come with an 18-carat gold plated bathroom with a sunken circular bath and the exclusivity of a private, shaded pergola.
Movie stars Ben Affleck and Jennifer Garner are allegedly spending Christmas in the rolling mountains of Montana with their young children to escape the prying eyes of the media following their split earlier this year. According to US Weekly, the family will stay at the exclusive Yellowstone Club in Big Sky. You can follow in their footsteps and enjoy a celeb-inspired trip to Montana by staying at DoubleTree by Hilton Hotel Missoula - Edgewater, located on the banks of the Clark Fork River in the heart of the Northern Rockies and just minutes from beautiful countryside, snowy mountains and world-class fly fishing, from £59 per night.

Beyoncé and Jay-Z travelled to Phuket, Thailand for their Christmas break in 2014. The couple were spotted on the beach, where Beyoncé had her face painted and rode an elephant. One eyewitness said the pair looked "very much in love" and were "having a blast" on their festive trip with daughter Blue Ivy. The family topped off their Christmas and New Year break by moving on to Burma to visit the sites.