How the work Christmas party can end your career 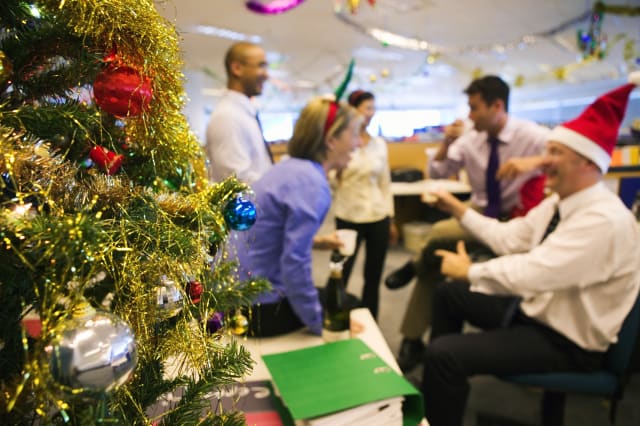 It's that time of year again, and all around the country, hotels, restaurants and offices are full to the brim with revellers enjoying their company Christmas party.

The warm white wine is circulating, the barriers are coming down - and some people are likely to end up in trouble.

Recent research from reputation management form Igniyte suggests that one in five employees fully expects to say or do something embarrassing at this year's company do.

Almost 30% admit to having flirted with a work colleague at an office Christmas party, and more than a quarter have had a kiss. One in ten has drunk so much alcohol that they didn't turn up for work the next day.

And while you might think that misbehaviour outside business hours is acceptable, the bad news is that it can still be a firing offence. If your bad behaviour takes place in a 'work context' you can still be fired, and a company Christmas party certainly counts.

In fact, you can even be fired for gross misconduct when socialising away from your colleagues if there are 'legitimate implications for the business'.

So what sort of Christmas party behaviour really will get you fired? We look at some of the sure-fire ways to ruin your career.

Organise it - badly
In some cases, the office Christmas party can do for your career before it's even begun. Last year, for example, Urban Outfitters was accused of racism after organising a company Christmas party that urged staff to 'break out your juttis, kurtas, turbans, saris, lehenga cholis and harem pants'. A Mexican-themed Christmas party organised by the University of Sydney was cancelled at around the same time.

Or call it the wrong thing
This week, right-wingers and fundamentalist Christians are calling for the chancellor of University of Tennessee-Knoxville to be fired. His crime? Asking department heads to make sure that their celebrations were as inclusive as possible.

"Holiday parties and celebrations should celebrate and build upon workplace relationships and team morale with no emphasis on religion or culture," he wrote. His words have been described as a 'war on Christianity', and his position's now looking pretty shaky.

Harass the opposite sex
With more than a quarter of employees having enjoyed a sneaky kiss at a company Christmas party, it's clear that a little flirtation is usually fine. When it tips over into harassment, though, things are very different.

"I once had a client that found themselves being sued for sexual harassment at a Christmas party," says Meredith Hurst, a partner at employment lawyers Thomas Mansfield. "They ended up spending more than £27,000 defending the claim - I think that might be the most expensive Christmas party they ever organised!"

While compliments are fine, suggestive remarks really aren't - and don't even think about holding 'rear of the year' awards or organising fun and games with sex toys. Believe it or not, it happens.
%VIRTUAL-ArticleSidebar-jobs-guide%
Insult your colleagues
Three years ago, Virgin Media worker Tracy Cordiner was fired for her unorthodox office party chit-chat. She called one employee a 'black bitch' and another a 'whore', and sexually harassed a male colleague.
Her claim for unfair dismissal was turned down.

Fail to turn up the next day
There's probably no worse time to claim you're ill in bed with flu than the day after the company Christmas party. Even if you think you really are sick, you'd better turn up - because nobody will believe you.

Hollyoaks actress Stephanie Davis was fired this summer after arriving too hungover to work; the fact that it's Christmas may not make any difference.

On top of this, do you really want to be the only person out of the office when the party post-mortem gets into full swing? After all, the very fact that you're hungover implies you probably drank enough to do something gossip-worthy...

Live in the wrong country
And that means this one. Two years ago, the production manager of a laundry in New Zealand was cleared of sexual harassment, despite having a 'graphic and prominent phallic symbol' strapped to his Santa suit.

And earlier this year, an Australian court decided that a man shouldn't have been dismissed after getting drunk at the company Christmas party and telling his bosses to f*** off' - the judge ruled that it was the company's fault for supplying so much to drink.

How the work Christmas party can end your career

A barrel of beer