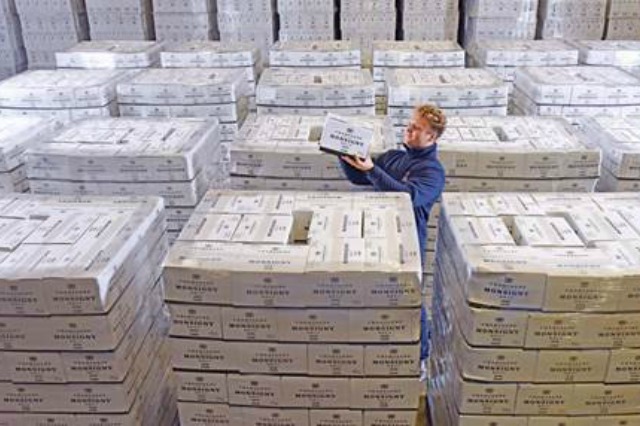 Aldi is the new home of Christmas bubbly. It has announced that one in every 12 bottles of Champagne bought in the UK is Aldi's Veuve Monsigny Champagne Brut NV. This Christmas it is expecting to sell 50% more of its Champagne than last year - and has 750,000 bottles at the ready.

It's hardly surprising. The champagne costs just £10,99 and has picked up a number of awards - including a Decanter silver, an IWSC bronze, and a Quality Drink award. It has also been recommended by Good Housekeeping.
%VIRTUAL-ArticleSidebar-Christmas%
Many loyal shoppers agree. One Tweeted: "@AldiUK I think Aldi do the BEST champagne #AldiFavouriteThings" Another added: "Fantastic champagne from #aldi recommended by #goodhousekeepingmagazine and me. Paid £9.97 a bottle." One said: "Aldi champagne and it's actually French and good - the world has gone mad", and another added: "Aldi champagne, £9.95 a bottle is a steal. I'd get some whilst you can mate #christmastoptip".

Posh spirits include Whitley Neill Handcrafted London Dry Gin (£19.99), which is also sold at the Dorchester hotel. Then there's the Kraken Black Spiced Rum (£18.99) - which is £14 cheaper at Aldi than in Harvey Nichols. And perhaps most strikingly a 24-carat gold labelled Russian Vodka. The Imperial Collection Gold Vodka is apparently filtered using gold thread, before being put in a bottle decorated with gold. The same product is available on Amazon for £35.

This, in turn, is part of a larger luxury range introduced for Christmas, including delicacies like Serrano ham and lobster. This is a key part of Aldi's plan to appeal to more upmarket customers - which also includes opening stores in posher areas.

The discounter is not only trying to make inroads into mid-range stores, but also rival high-end supermarkets - in recognition of the fact that this is the only other part of the market that continues to grow.

By launching award-winning products - and drawing attention to the fact they are also available in the likes of Selfridges and the Dorchester, they are hoping to lure customers in to try them for Christmas, and hopefully stay for the weekly shop.

But what do you think? Are you tempted to buy your Christmas booze at Aldi, or do you think your guests expect posher brands on the Christmas table?

"Nice taste but not enough fizz."
"It's harsh at the back of the throat."
"This one's rather flat for me."

The Sainsbury's Taste the Difference might have been one of the priciest bottles of supermarket champagne but the tasters picked up on how quickly it went flat and scored it the same as the other bottle from Sainsbury's at 2/5.

"Oohh it's like drinking the stars."
"It has a lovely crisp, dryness."
"Well balanced, I could drink more of this."

This champagne had the tasters waxing lyrical and even going on to jokingly quote the forefather of chamagne, Dom Pérignon - "Come quickly, I am drinking the stars!" was falsely attributed to the monk in the late 19th century. They even tried to come back for more after scoring it a near-perfect 4.5/5.

"This is tart without being harsh."
"What a deicate flavour."
"This is the most distinctive and bold."

The Asda extra special might have been the cheapest bottle on trial but it packed the biggest flavour punch, scoring highly with the testers on aroma and depth putting it in second place with an average mark of 4/5.

"This tastes of luxury."
"It's very rich."
"Very smooth and slightly creamy."

Co-op's second offering was well received with all of the tasters praising its rich flavour notes and texture. Co-op's cheaper bottle scored highly enough to secure third place with an average mark of 3.5/5.

"Easy to drink and the most citrusy of the bunch."
"It's the most acidic."
"A bit too gassy - burping isn't great for a dinner party!"

"Pungent smelling and a bit harsh."
"Fruity with very little acidity and quite well balanced."
"It's overpowering, I couldn't drink a lot of it."

Before the labels were hidden the tasters were the most excited to get stuck into this bottle from Marks and Spencer. Despite being the most expensive bottle in the trial, it only scored an average of 2.5/5 putting it in third place.

"It's not crisp at all, or fizzy enough."
"It's light, almost too light in fact."
"It tastes like cava to me."

This offering from Sainsbury's fell flat with our tasters, literally. All the testers commented on the lack of fizz and depth leaving the Blanc de Noirs with an average score of 2/5 and in jint bottom place.