A Christmas tree... or a wizard's hat? 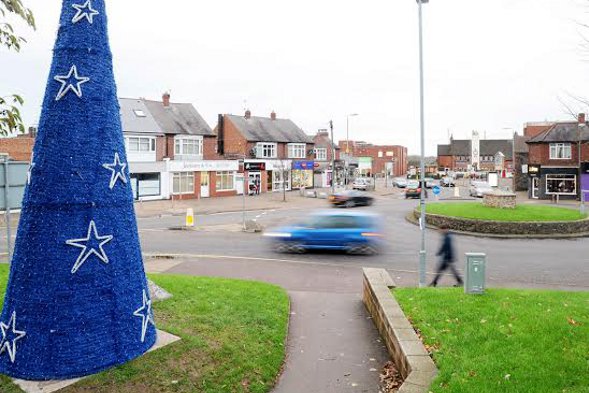 Residents of a Leicestershire village are pleading with their parish council to get rid of a bizarre Christmas tree that's costing them thousands of pounds.

Dubbed the Wizard's Hat, the bright blue, 25-foot tree has been rented by Birstall Parish Council for three years, at a cost of £6,196 per year, plus £2,600 storage costs.

The parish council chose the tree after complaints about last year's decorations, enabled by the fact that it had £8,000 of spare funds.

But there's now a petition for it to be removed and replaced with something more traditional instead. More than 200 people have already signed.

"What were they thinking? £24,000 of our taxpayers' money. I work hard for my money and resent my taxes being wasted on this," says local resident Brenda Bentham.

"I love a Christmas tree, but not this Disney-themed tin thing. Loughborough have a wonderful large pine tree. I bet it didn't cost £8,000."

And, adds Beverley Robinson, "This is nothing like a Christmas tree. I would rather have nothing at all than this. It would be a waste of money if it only cost £1, and to say they have £8,000 in the kitty should mean that they spend this money wisely and not waste it."
%VIRTUAL-ArticleSidebar-Christmas%

The parish council tells the Loughborough Echo that, after last year's criticism, it wanted to try something different.

"The council hoped to restore a sense of pride in Birstall's Christmas celebrations and put us on a par with our neighbouring parishes," it says in a statement.

It says that health and safety laws mean it can't put up a large tree itself, and adds: "We understand that residents have concerns about the expense, but it actually calculates out as a one-off payment of 71p of the council tax for each person on the electoral roll for 2015."

Birstall parish councillors should take heart from the fact that they're not the only ones to get stick for the quality of their Christmas lights this year.

Residents of Tiverton in Devon recently pointed out that their lights this year look for all the world like a string of sparkly knickers hanging from a washing line - hitting a 'bum note', according to the local paper.

A Christmas tree... or a wizard's hat?
This year when you're sending the obligatory Christmas card to relatives you never see and friends of the family you hardly remember you really can send an obligatory Christmas card.
From the school of 'if you can't beat them join them', this card is a handy option for those celebrating their birthday at this time of year.
For the mad cat lady/man in your life, you can combine festive greetings with explicit acceptance of your lowly position in the pecking order. What's not to love?
For the passive aggressive card giver, it doesn't get any better than this brilliant card.
On first glance it's an homage to Christmas misery, but on closer inspection it's something much more fun.
For anyone who is Home Alone for Christmas - or who has a soft spot for 1990s Christmas classics - this card ticks all the boxes.
If all this festive nonsense is getting really irritating, you can rectify it all immediately with this card. Guaranteed to burst any festive bubble.
If you have the kind of socially awkward family that prefers to send cards instead of expressing any real emotion in person, then why not make the whole thing explicit with this card? It comes with the added benefit that it's guaranteed to make anyone even more socially awkward.
Why should you do all the hard work? You bought the card, and wrote it and sent it, the least they can do is agonise for hours over where the word 'pudding' is lurking.
It's an excellent point. There has really been very little clarification as to what is classed as naughty and what is nice. In fact the whole system is riddled with inconsistencies: let's get this in writing.
Up Next