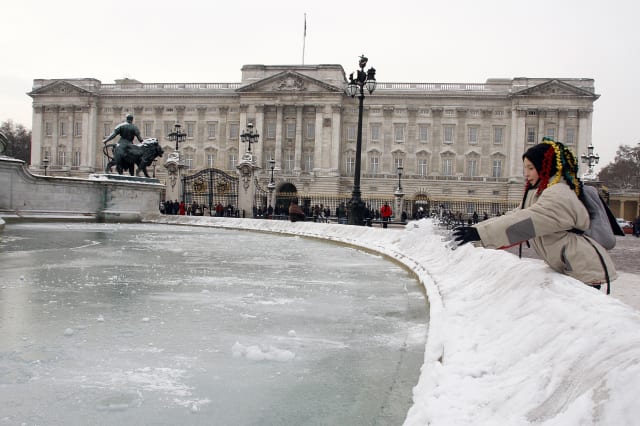 After snow fell across Britain this weekend, including in London, bookmakers have been forced to slash the odds on a white Christmas in the capital, with odds currently standing at 4/1.

According to Ladbrokes, Newcastle is the most likely English city for a festive dusting with odds of 9/4.

For Aberdeen, the odds stand at 7/4, while Manchester has been given odds of 4/1 and Glasgow 2/1.

This winter could also be the coldest since the Big Freeze of 1963, according to the latest odds from Ladbrokes.

With the mercury set to plummet again, bookies are now offering odds of just 4/1 (from 16/1) that Britain shivers in an average temperature lower than what was recorded in 1963.

Alex Donohue of Ladbrokes said: "The odds of this winter going into the weather record books are falling as quickly as the snow."

ITV News reports that pundits at Coral have said the chances of the River Thames freezing stands at 20/1 and the bookmaker has been "snowed under" this weekend with people placing bets for a white Christmas in Britain.

Meanwhile, weather forecasters say there are now signs that the jet stream will take a more southerly path during December.

The Weather Network reports that this could allow high pressure to build to the north of the UK and bring wet, windy weather across the south.

"In this situation temperatures would be on the mild side and the likelihood of any wintry weather would be very restricted," forecasters at The Weather Network say, adding though that "things could easily change like they did recently".

Odds slashed on white Christmas in London as winter arrives early
People throw snow balls near the Leaning Tower of Pisa and Piazza dei Miracoli covered with snow in December 2010 in Pisa, Italy.
Japanese macaque, commonly referred to as 'snow monkeys', react next to an open-air hot spring bath, or 'onsen' at the Jigokudani (Hell's Valley) Monkey Park in the town of Yamanouchi in Nagano prefecture, Japan in December 2012. Some 160 of the monkeys inhabit the area and are a popular tourist draw.
Autumn and winter collide as a snow storm moves into the Colorado mountains near Idaho Springs, USA in October 2013. The mountain could see up to a foot of snow from the storm.
Snow-covered Paris still attracts window shoppers as a heavy December snow blankets the French city.
Spending christmas in Finland, Kai Kubierske from Bonn in Germany gets out after swimming in a hole made in the ice at the Gulf of Finland in December 2012 in Lauttasaari, Helsinki.
People enjoy the winter weather on a beach in Biarritz, southwestern France in December 2012 as the temperature reached 22 C.
Friends enjoy sledging on Brecon Beacons, Wales, where snow settled in January 2012.
Deer in the snow at Whitworth Hall Country Park, County Durham as the winter weather continued across the UK in January 2013.
People make their way along the Great Wall of China at Badaling north of Beijing following a night of snowfall in February 2010. A blanket of snow whitened Tiananmen Square and northern sections of the Great Wall overnight in the latest round of freezing weather during the often bitter Chinese winter.
A father and his son slide over snow at the Trocadero Square near the Eiffel Tower in Paris, France in December 2010.
A man runs across the Brooklyn Bridge following a major winter storm in February 2013 in New York City, USA.
Alaskan Huskies eagerly howl at Villmarkssenter wilderness centre on Kvaloya Island, Tromso in Arctic Circle Northern Norway.
The Aurora Borealis over Fjord Grundarfjorour in February 2011 in Snaefellsnes, Iceland. The incredible aurora image may fool you into thinking they were taken in broad daylight. Kerstin Langenberger spent 300 hours chasing The Aurora Borealis by full moon to capture this rarely seen image.
A man shovels snow near the giant icicles on a rock in central Tbilisi, Georgia in February 2012. The temperatures in Georgia's capital dropped to -6C.
A couple climb onto a Soviet era monument dedicated to the Russia and Ukraine union in Kiev, Ukraine in February 2012.
Tourists walk through Voskresenskiye (Resurrection) Gates as they leave the Red Square in Moscow, Russia in March 2013, with landmark St.Basil's cathedral rising in the background.
People walk on Galata Bridge covered with snow in Istanbul, Turkey in January 2013.
Families enjoy the snow in the Stormont estate in Belfast.
Sheep grazing in deep snow in a field outside Dunleer, Co Meath, Ireland.
A couple walks on the snow-covered Strandbad Wannsee beach during its opening for the year in March 2013 in Berlin, Germany.
The sculpture Cloud Gate, commonly known as 'The Bean', is covered in snow in March 2013 in Chicago, USA.
A Palestinian man walks near palm trees as snow falls in Jerusalem's old city in January 2013. Jerusalem was transformed into a winter wonderland after heavy overnight snowfall turned the Holy City and much of the region white, bringing hordes of excited children onto the streets.
The Cibeles statue stands covered in snow and ice after snowfall in Madrid in January 2010.
Snow covers typical Dutch scenery in the centre of Amsterdam, Netherlands in February 2012.
Richard and Samantha Stretton from Newcastle enjoy a walk at the Angel of the North in Gateshead, UK after heavy snowfall.
A woman walks on the snow covered beach in Palma, Mallorca in Spain in February 2012.
Boats are seen trapped on the frozen lake of Kastoria town in northwestern Greece in February 2012.
Bathers enjoy naturally warmed spa water as they relax in the rooftop pool of the Thermae Bath Spa, Britain's only natural thermal spa, in Bath, England surrounded by winter snow.
The biggest Hungarian icebreaker for rivers, the 40-metre-long Szechenyi, navigates through the ice-covered waters of the Danube River nearby the parliament building in Budapest in February 2012.
The snow covered fields and villages in the Bhaderwah Valley, around 200km east of Jammu, India in December 2012.
20-year-old women dressed in kimono walk on a snow covered street to attend a coming-of-age ceremony in Tokyo in January 2013.
A young Bennet kangaroo sits in the pouch of its mother in the zoo in Stralsund, northern Germany in March 2013.
Snow and ice settle in at the base of Niagara Falls in Canada, where the largest ice bridge in two years has formed under the transforming touch of winter.
Up Next