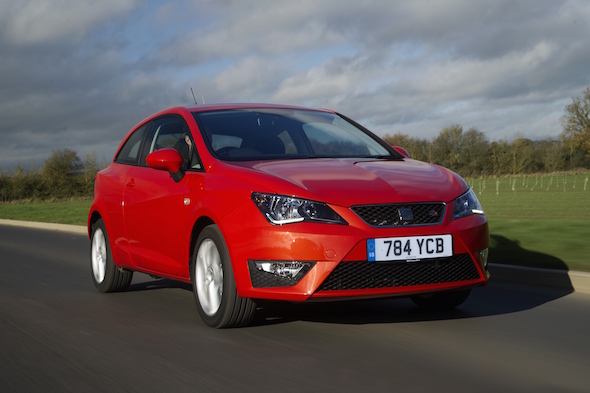 In an industry littered with superminis, it can be a little overwhelming to decide which one to buy. For young drivers, however, the typical key buying requirements make it a tad easier to choose the right one: is it cheap to buy, does it have a low insurance group, is it fuel-efficient, is it pokey enough and does it come with all the latest gadgets? If it looks the part, that's a bonus, too. So, AOL Cars headed to the Buckinghamshire countryside to try out one of the industry's leading contenders.
What is it?

Here we have the revived and refreshed version of one of Seat's most important models. That's right, this is the new Ibiza hatchback – best known for its appeal to young drivers. The most significant, and noticeable, improvement over the outgoing model, which was first launched in 2008, is a much-needed new interior. In other words, the revamped Ibiza has adopted the look of the latest Leon, making it a smaller version of its big brother. What's more, Seat has also tweaked the Ibiza's driving characteristics. But would you buy it over the likes of a Suzuki Swift?

In regards to power units, you'll be spoilt for choice; much like a pick 'n' mix sweet selection. The engines have been upgraded, too, to help increase efficiency. The biggest update is the addition of a new 93bhp 1.0-litre, three-cylinder turbocharged engine, alongside the normally aspirated 74bhp units. There's also a 108bhp 1.2-litre four-cylinder TSI unit available and a sportier 1.4-litre 148bhp TSI for FR cars. Each powerplant is mated to a five-speed manual gearbox, except for the six-speed FR models and the 1.0-litre EcoTSI, which comes with a seven-speed DSG automatic transmission. There are two diesel engines available: the 1.4-litre 74bhp and 108bhp TDI units. On another positive note, you'll be able to get more than 300 miles out of a full tank of fuel from the 74bhp 1.0-litre, which has a combined fuel consumption figure of 54.3mpg.

Resembling the Leon, the refreshed supermini features a new steering wheel, a cleaner and bolder dash layout and significantly improved, high-quality materials. Seat offers five trim levels across the range, kicking things off with the entry-level S, the mid-range SE, Vista and Connect models and the range-topping FR model. At a glance, the exterior has hardly changed, aside from the fact it is now equipped with LED daytime running lights and comes with a suite of six colour packages, new body paint and new alloy wheels.

Focusing on internal updates, buyers can spec their Ibizas with a range of new gadgets, including a 6.5-inch sat-nav and the carmaker's 'Full Link' system. This enables those on board to enjoy Apple Car Play, Android Auto and Mirror Link connectivity, helping to keep drivers and passengers safely connected while on the road. Considering the demand for reasonably priced cars with higher levels of equipment, especially from the next generation of motorists, this is a strong move for Seat. We'd go for the mid-range SE model with the 1.0-litre petrol engine, which is equipped with DAB radio, air-con, Bluetooth, USB connectivity, electric-heated mirrors, a five-inch touchscreen infotainment system and tyre pressure monitoring as standard.

The Ibiza continues to rival the other prominent contenders in the supermini segment, including the Ford Fiesta and the Peugeot 208. While it's not quite as satisfying to drive as the Fiesta, the popular Vista-spec Ibiza is cheaper than the Zetec Fiesta – and it comes with more equipment as standard. The 208 is slightly cheaper, knocking a few hundred pounds off the price, but once again, it loses points to the Ibiza for a lack of standard equipment.

The Ibiza has always been an easy, and relatively satisfying, car to drive and, thanks to its improved handling, this remains unchanged. Around town, you'll be pleased to know the steering is light and precise, which makes manoeuvring into tight spaces all the more simple. Sadly, though, this does compromise its appeal on the open road when you're tackling faster and tighter corners.

You'll notice the ride is slightly more refined, though, because Seat has retuned the steering and suspension to optimise comfort and driver involvement. The little 1.0-litre is smooth through the gears but it does take a whopping 14.3 seconds to reach 62mph. That said, acceleration is prompt and it does grip well in the corners, even if it's not quite up to the standards of the nippy Ford Fiesta.

If you're looking for a comfy supermini, with enough poke to bring a smile to your face and a price tag to please your bank balance, the Ibiza is definitely worth considering. Bearing in mind the equipment it comes with, a £13,000 asking price isn't too bad at all. If you're a commuter and likely to drive at consistently high speeds, then we'd recommend the 1.0-litre EcoTSI 93bhp model.