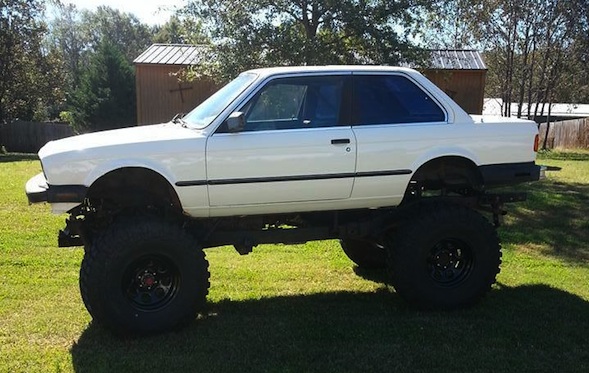 A 1986 BMW 3-series that had been converted into a monster truck for Top Gear USA has been placed on eBay this week.

The custom-built 3-series which went unsold had a highest bid of $2,650, having a reserve set at $3,500 in its second attempt to be sold.

It was driven on the show by racing driver and presenter Tanner Faust during the first episode of the second series, shown on America's History Channel.

In the challenge set in Texas, Faust and his fellow presenters Adam Ferrara and Rutledge Wood were told to convert their cars, Ferrara's Ford Maverick, Wood's Mazda Miata (MX-5) and Faust's 3-series, into monster trucks for the final challenge.

Faust won the final event, a six-lap race, after Ferrara's Maverick caught fire, and was then used as a jump, and the Mazda lost a wheel at one of the corners, leaving Wood stranded, and Faust free to win.

Monster 3-Series goes up for sale online
Up Next


The BMW has been modified so that it sits on a Toyota 4x4 chassis to hold the 39-inch tyres, whilst the cab has been fitted with a full roll cage, racing seat and full safety harness.

During the first attempt to sell the 3-series, the bidding reached $3,100 before falling just short of the seller's estimate.

The seller onda1101 the car "runs and drives great", adding, "It will need running lights wired up to make street legal and some interior work is needed if you're wanting to make it a daily driver."