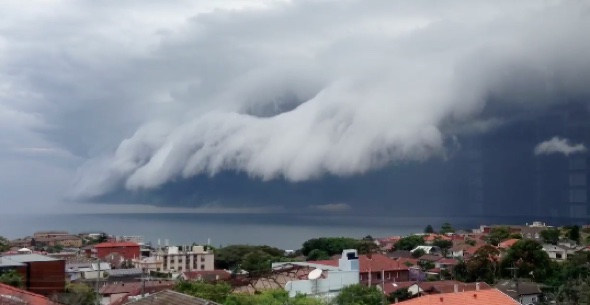 A dramatic shelf cloud, dubbed a 'tsunami cloud', has been spotted looming over the skies in Sydney.

The cloud, also known as an arcus cloud, drew crowds as it developed over Bondi Beach.

See also: Have you ever seen a tsunami in the sky? (Video)

Pictures and videos of the dark grey cloud were uploaded to social media.

Just caught this storm coming in from the south. Look out Bondi! @canonaustralia #sydneystorm #canon5Ds #24-105mm

Footage captured by Will Reid even showed the cloud 'rolling' like a giant wave.

A storm about to punish Sydney's Eastern suburbs. pic.twitter.com/r5bECt1G3B

Eyewitness Hannah Murphy told CNN: "Walking towards the beach it looked to me like a huge wave coming from the back of the ocean about to swamp us all!"

"People were running from the streets to capture the unbelievable cloud formation."

The Belfast Telegraph reports that the Australian Bureau of Meteorology issued a severe thunderstorm warning for some areas in Sydney.