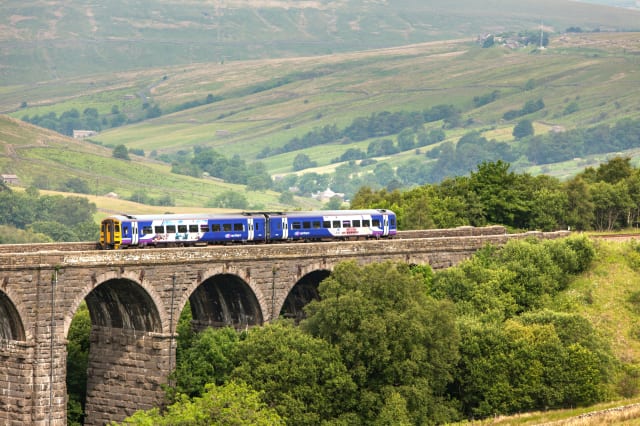 England doesn't have the highest mountains, the biggest lakes or the longest bridges in the world, but there are still few better ways of seeing this green and pleasant land than from the window of a train as you glide effortlessly through the countryside. Here are four of the best train journeys England has to offer, all different but all brilliant... 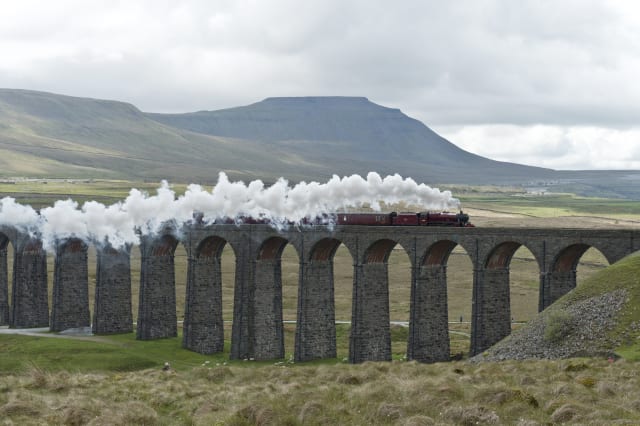 Running for 73 miles from the southern end of the Yorkshire Dales National Park to the northern end of Cumbria, the Settle–Carlisle railway is held by many to be England's most beautiful rail journey. If you start at the southern end then your journey begins in the wide, green valleys of the Dales, with the distinctive flat-topped hill of Ingleborough soon looming into view as your train approaches the 24 arches of the iconic Ribblehead Viaduct.

See also: The most beautiful villages in the UK

There are plenty more viaducts to come (another 20 in total) as the impressively engineered line makes it way northwards through the undulating countryside. Eventually the Dales give way to the wild North Pennines and the Howgill Fells – and the high hills of the Lake District are seen on the left. Gradually the landscape becomes more cultivated as the line travels through the Eden Valley, before making its way onwards to Carlisle – where it arrives around one and three-quarter hours after departing Settle.

During the summer, there are weekly steam train journeys aboard the Fellsman for a romantic, authentic experience. 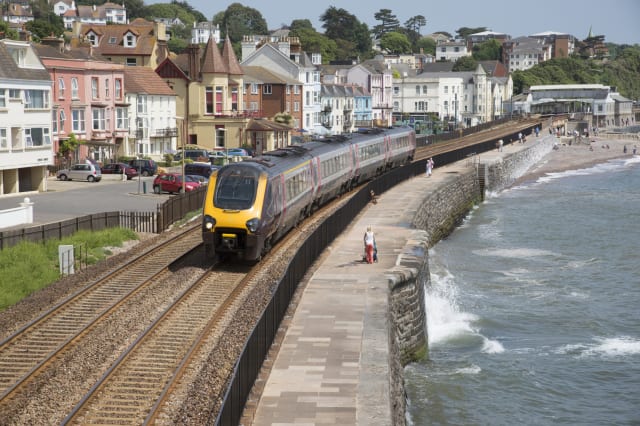 Considerably shorter but just as scenic in its own way, the rail journey from Exeter to Teignmouth in Devon hugs the stunning estuary of the River Exe before turning west along the coast at the resort of Dawlish Warren. Popping in and out of tunnels through cliffs and headlands, the line runs so close to the sea that you might be worried about getting your feet wet. In fact, the line has had to be closed in the past when the track has either been flooded or subject to a landslide. 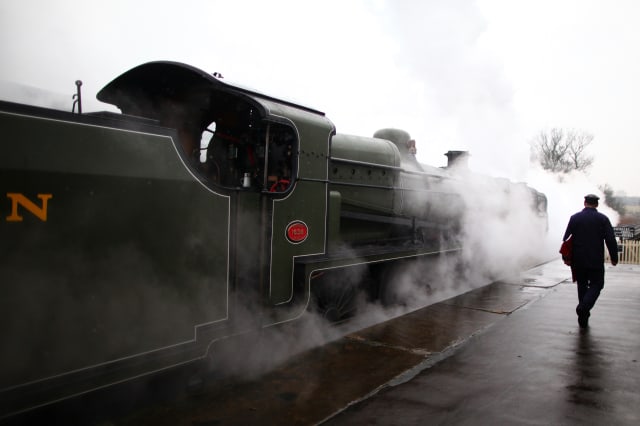 While the above train journeys are run on the normal rail network, the famous Bluebell Line in East Sussex is what's known as a heritage line. The 11-mile stretch of track runs along the border of East and West Sussex, travelling from Sheffield Park near Haywards Heath to East Grinstead. And best of all, it hosts the largest collection of restored steam locomotives in southern England – which run daily until November 1. As well as taking visitors through the pleasant Sussex countryside, the line also takes them on a journey back through time – with stations restored to the character and ambiance of different periods including the Victorian era, the 1920s and the 1940s. 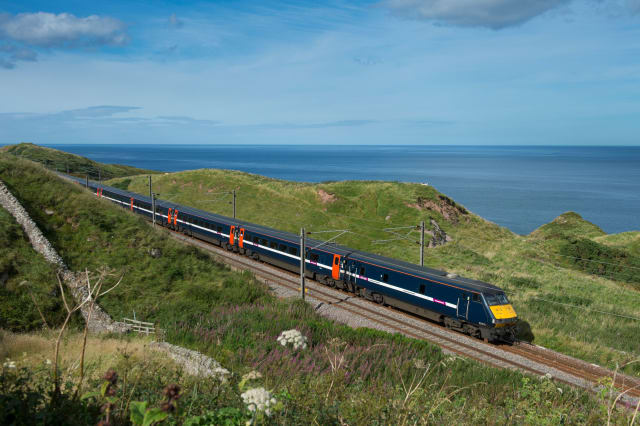 The North East of England is one of the most overlooked and under-appreciated areas of the UK when it comes to natural beauty and spectacular scenery. But what the region lacks in national parks or lofty peaks, it more than makes up for in rugged beauty and history. Starting from the charming city of Durham, the East Coast Main Line heads north to Newcastle-upon-Tyne – with passengers enjoying panoramic views of the city and its iconic bridges.

Leaving the city behind the Northumberland countryside beckons – and the train runs alongside the handsome coastline for miles, with historic castles punctuating the scenery. The journey ends in spectacular fashion as the line crosses the Royal Border Bridge into Berwick – from where visitors can travel to Holy Island if the tide allows.

Reaching heights of 3000 feet and going 100 miles the other side of the Arctic circle, this trip links Stockholm and Kiruna, in Norway. Highlights include the longest fjord in the world, Sognefjord, which is 126 miles long and 4000 feet deep. Come in the summer, and you'll experience the meaning of the term, 'land of the midnight sun'. Visit greatrail.com for more info.

There's no doubt that this is the most luxurious way to cross India. A steam engine drags the train out of Delhi for a week-long trip to the royal estate at Rajasthan. Along the way there's canoodling with elephants in the pink city, Jaipur, a camel safari in the desert at Jaisalmer and a tour of Agra's extraordinary Taj Mahal. Visit thepalaceonwheels.net for more.

Beginning in Cuzco (one of South America's most enchanting cities) and winding its way along the path of the Urubamba River, Peru's famous railway line takes in colossal Andean mountains, Inca ruins and llamas galore. And that's before you get to the unbelievable lost city of Macchu Picchu. For more info, visit machupicchutrain.com for info.

Great Rail Journeys offers berths on arguably the greatest passenger train on the planet, the Golden Eagle, for an astounding ride covering 11 time zones. This epic journey begins in Warsaw and ends 8,000 miles away in Vladivostock. Along the way there's a chance to go ice fishing in the world's biggest lake, Baikal, take a troika carriage in Suzdal, lunch out in a traditional Mongolian 'yurt' tent and gape at the golden domes of Yaketerinburg.

The Orient Express is a byword for luxury travel. Traditionally it served Paris and Istanbul, but that's no longer the case. These days it runs between Strasbourg and Vienna, so you'll have to improvise. Four journeys- Paris-Strasbourg, Strasbourg-Vienna, Vienna-Belgrade and Belgrade-Istanbul- will suffice, taking you from the heartland of Western Europe to the gateway of Asia. Truly a journey worth undertaking, 127 years since its maiden passage.

This railway has been in operation since 1893, giving spectacular views of one of Switzerland's most beautiful regions. It climbs from Interlaken to a height of 11332 feet at Jangfraujoch Station. A phenomenal feat of engineering allows the train to enter through the middle of Eiger mountain. From the top you can see as far as the Black Forest in Germany- this is the so-called 'Roof of Europe' after all. Inside the glacier is Ice Palace, an exhibition of ice sculptures. The cost of a return fare is steep - fares are over hundred quid - but well worth it. Visit jungfrau.ch for more.

The Blue Train offers a luxury service crossing South Africa. It takes in Victoria Falls, the haunting barren landscape of the Great Karoo and the incredibly seaside city of Cape Town. And along the way you'll be glued to the window hoping to spot elephants, lions and other wonderful animals in their wild habitat. Visit bluetrain.co/za for more.

If you want a taste of real speed try a ride on Japan's Shinkansens. The latest model of these bullet trains reaches speeds of 186mph. This means you reach Osaka from Tokyo (515 km away) in a mind-boggling two hours and 25 minutes. You can take a Shinkansen all the way across Japan, from Kagoshima in the south-west to Hachinoche in the north-east. Just be sure not to blink. Visit seat61/japan for more.

Beginning in Tangier (the sleazy port which inspired the likes of Paul Bowles, William H. Burroughs and Jack Kerouac) the train stops at the delightful medieval town of Asilah . Then it heads inland from the modern metropolis of Casablanca, home to the stupendous Hassan II Mosque. The closer to Marrakech one gets, the land becomes pinker and barer, until the foothills of the Atlas Mountains- where the magnificent city itself appears in all its glorious weirdness. Visit greatrail.com for more.

This engineering triumph – which cost $90 million and took 90 years to complete – crosses the guava-spotted deserts and canyons of northern Mexico, linking the Pacific Coast and Chihuahua City by way of 87 tunnels and 36 bridges. The Copper Canyon itself features two climactic zones, so sub-tropical forests give way to a cool alpine climate with oaks and pines. for Visit mexicoscoppercanyon.com for more info.

Don't listen to what anyone else says; from Switzerland to Siberia, by bullet train or steam engine, it's still the best way to travel.