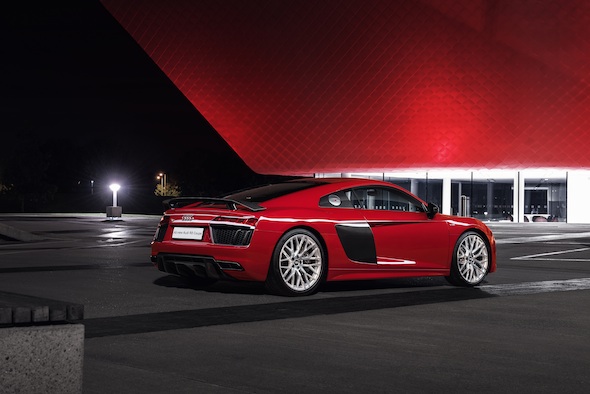 This is the second generation of the Audi R8 that was revealed to the world at the Geneva Motor Show in March this year, but the road car hasn't been available until now.

Developed alongside, and sharing 50% of the components of, the successful GT3 racing version appetites are truly whetted for the latest version of Ingolstadt's R8 supercar.
What's under the bonnet?

Luggage space - and not very much of it.

The engine actually sits behind the driver, and it's a whopper. Avoiding the modern trend for smaller engines boosted by turbochargers, Audi has instead gone for a 5.2-litre V10 - good for 601hp in this plus model and 532hp in the standard car.

All R8s use Audi's 7 speed S tronic gearbox and quattro four-wheel drive system, and this means that 62mph comes up in just 3.2 seconds - and if you've got a long enough road it won't run out of acceleration until you hit 205mph. You'll want to do this as often as legally allowed as the V10 makes the most glorious selection of noises we've heard in a long while.

It even has start/stop and cylinder deactivation to help it along to 23mpg combined...

There's two specifications of the R8 - the regular V10 and the enhanced V10 plus model. Whichever you pick, you'll get what Audi calls a "monoposto" cabin - "driver-focussed" - trimmed throughout in Nappa leather and Alcantara.

Every R8 also bears the new all-LED headlights and the excellent Virtual Cockpit. This gizmo is a digital instrument cluster built around a 12.3" TFT display, with a number of different display modes including a full-width satellite navigation display.

The V10 plus gains a few extra goodies like controllable exhaust flaps to maximise the engine's awesome soundtrack, drive mode select with wet and snow settings and meaty carbon-ceramic brakes. It also has a fixed carbon fibre wing - the regular car has an active spoiler - alongside other carbon fibre accents like the signature sideblades.

Both R8s can be equipped with option laser high-beam assist that give a narrow-focus beam of light twice the distance of the LEDs - around half a kilometre away!

First drive: Audi R8
Up Next

What you'd pick instead depends on what R8 you buy. The regular V10 will likely be facing off with McLaren's new baby 540C and Jaguar's AWD version of the F-Type R, while the V10 plus is more in the sights of the McLaren 570S and the Aston Martin V12 Vantage.

The big hurdle for both though is the Porsche 911 - specifically the Turbo and Turbo S models respectively. These are similarly priced, have similar performance and are also four-wheel drive and automatic.

It'll come as no shock that the R8 is really very fast indeed. It's a six-figure, 600hp supercar and if it didn't return figures that start with 'three-point' or 'two hundred' and, you'd be surprised.

It's not the speed of the thing that's relevant then, rather how it does it. By avoiding turbocharging, Audi has created a rev-happy unit with a very broad torque band and immediate throttle response. It's an incredibly flexible engine and will pull at any speed with ease.

The quattro four-wheel drive system is nearly impossible to out-fox too, so the R8 will hit 60mph in under four seconds even if it's raining stair rods. Probably if it's snowing too, but we probably wouldn't risk it. It makes for a car that you almost can't unstick, unless you're really trying to crash it.

Wet or dry, the R8 makes for a fabulous weapon on fast country roads, with beautifully weighted, responsive steering, great brakes and that V10 growling and crackling behind you.

But then you set it into Comfort mode, turn the exhaust flaps back to normal and use it to potter about and it settles right into being a day-to-day car. The carbon ceramic brakes have something of an initial bite about them to just break the air of total civility, but otherwise it's stress-free, even in traffic jams. On a cruise down the motorway, we recorded the V10 plus at just 66 decibels in the cabin.

It's tough to argue against a supercar so civilised you can use it every day, come rain, snow or plague of locusts, so we're not going to.

The R8 is no harder to use on the daily grind than a hot hatch - and in fact it's a great deal more comfortable than some of the latest hot hatches - but adds in savage acceleration, just about unimpeachable all-weather traction and one of the great engine notes of this generation.