London to Brighton Veteran Car Run finishes for another year 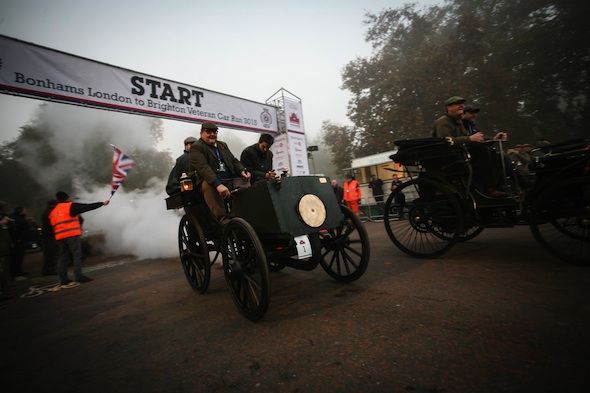 More than 380 cars took part in the Bonhams London to Brighton Veteran Car run in the event's 119th edition.

The annual race takes place between the Mall and Brighton's waterfront, in a race that takes in 60 miles between the capital and the Sussex coast.

Cars driven were from pre-1905, a period where motoring was very much in its pioneering and development stage.

The race traditionally starts at daybreak, and with the thick fog around when the cars made their way past Westminster, the event had a period feel and the cars looked at home.

There to start the event were BBC broadcasters Chris Evans, Alex Jones and Ken Bruce, Strictly Come Dancing's Natalie Lowe and Chairman of Bonhams, Robert Brooks, who as tradition tore a red flag.

The first cars arrived in Brighton's sunshine just after 10am, with John Bentley in the 1903 Berliet beating Jan Bruijn in a 1904 Fiat to the post.

Chris Evans said, "That was without doubt the best car experience I have ever done. I had no idea it was such a fantastic event. It was just an incredible day and one we must do again."