'Skull' asteroid to fly past Earth on Halloween (picture) 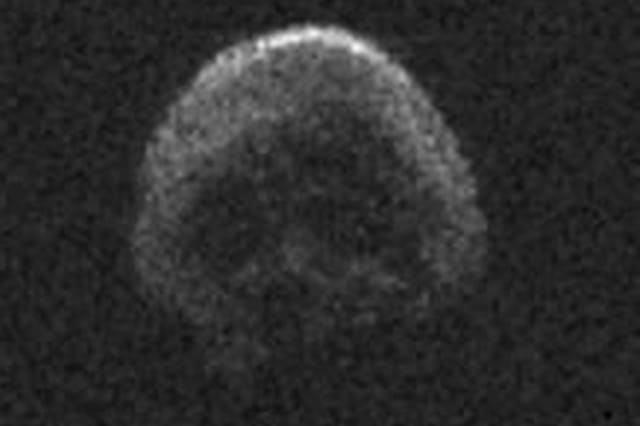 A huge asteroid resembling a skull will pass planet Earth on Halloween, NASA astronomers have said.

2015 TB145 was discovered by scientists earlier in October and will be the closest flyby of its kind until 2027. It will fly past Earth at around 5pm GMT.

See also: Asteroid size of the Albert Hall may hit Earth in 2017

The asteroid, which NASA called a "Great Pumpkin", will fly past Earth safely at a range of about 300,000 miles (about 1.3 times the distance between the Earth and the moon), according to Space.com.

It is larger than expected at 600m wide and is rotating every five hours.

See also: Near miss! Asteroid as strong as 15 atomic bombs whizzes past earth

There are signs to suggest the asteroid, which is speeding through space at 78,293 mph, may be a comet.

"It's not going to hit us and we will know its orbit really well so we can project it into the future and see whether or not it comes near the Earth again and we've done that and it's not going to pose any hazard to the Earth in certainly the next century."

'Skull' asteroid to fly past Earth on Halloween (picture)
"Tonight's Finale: The Richat Structure. A giant gazing eye upon the Earth."
"To commemorate the passing of the Iron Lady, in the centre of these London lights is #10 Downing Street."
"The Australian Outback is effortlessly crazily beautiful."
"The effortless natural art of the southern Sahara."
​"The beautiful and violent ugliness inside a naked volcano. Chad, Africa."
"Beijing just after sunset. I'm still trying to spot the Great Wall, but it's hard as it's narrow and dun-colored."
"A heraldic Spring dragon of ice roars rampant off the coast of Newfoundland."
"Canada rocks."
"Dr. Seuss-inspired swirls in the Black Sea."
"Little farmers, big farmers and nature, in Turkey."
"Big storm swirling off the Irish coast on 9th May."
"A sunny day in Scotland"
"To some this may look like a sunset. But it's a new dawn."
"Hope you Bruins play a memorable game tonight vs the Leafs."
Up Next