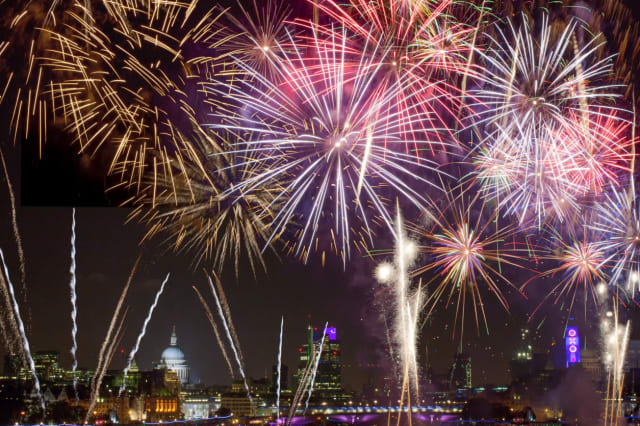 It's that time of year again: the leaves are falling, the nights are drawing in and the temperature has most definitely dropped...

As autumn gets fully into swing and we race towards winter and Christmas, the time for fireworks is upon us once again.

Each year 5 November, or Bonfire Nigh', marks the day in 1605 when Guy Fawkes tried to blow up the House of Lords as part of the 'Gunpowder Plot'.

So it's time to don your wellies, dig out your woolly hat and search for those gloves you lost last year and head out to watch some spectacular fireworks light up the skies.

There are plenty of options all over the UK most of which offer not only spectacular sparks but blazing bonfires, delicious food and entertainment for all the family.

See also: Ten places that are just as good in winter as they are in summer

Those in the capital have plenty of displays to chose from but Blackheath Fireworks are a firm favourite. It's one of the biggest free events in London, attracting as many as 100,000 people annually.

For those in Wales and Scotland, Cardiff Sparks in the Park and Glasgow Fireworks are well worth a visit with a host of funfairs, entertainment and amazing pyrotechnics on offer.

Fancy something a little different? Make your way to Devon and experience the famous Flaming Tar Barrels. This local tradition also boasts a fireworks display and bonfire to warm up next to.

To find out more about fireworks displays near you, take a look at the slideshow below.

This free fireworks display at Glasgow Green is the biggest Bonfire Night event in the Scottish city. It promises a funfair, entertainment and food and drink stalls to enjoy before an explosive finale. This year's event takes place on Wednesday 4 November and begins at 7.30pm.

In Lewes, spectacular torch-lit processions hit the streets on 5 November. Lewes Bonfire Night claims to be the biggest celebrated 5th November event in the world with its 17 burning crosses, parades organised by local bonfire societies and traditional costume-wearers, from Mongol warriors to Tudor dress.

As one of the biggest free community events in London, Blackheath Fireworks now attracts up to 1000,000 people each year. It attracts families, couples and friends to its funfair rides and a display of fireworks lighting up the sky over the Heath. This year's event will take place on Saturday 7 November with the display starting at 8pm.

Celebrate Bonfire Night with a bang at Blists Hill Victorian Town in the Ironbridge Gorge, where you can watch the spectacular fireworks extravaganza. The town's streets are as they would have been in the 19th century and you can talk to 'resident' Victorians at the shops, cottages and workshops that stay open. Don't miss the dramatic iron rolling demonstrations in one of the last working iron-rolling mills in the world. This year's fireworks event takes place on Saturday 7 November.
Fancy watching the fireworks from the beach? The Round Table Bonfire & Fireworks Display takes place at Anglesey's Penrhos Beach and features a bonfire lit by flaming arrows, a hog roast and rockets exploding over Holyhead Bay. They even run a 'build a guy' competition for local schools. This year's event will be taking place on Thursday 5 November with gates opening at 5.30pm.

Soak up the atmosphere at Tutbury Castle, where you can enjoy an alternative fireworks night with Viking games and a barbecue. There will be a moonlit battle followed by a Viking 'funeral'. Tutbury Castle isn't just satisfied with one display though, the historic building will be hosting three consecutive nights of sparkling fireworks displays. Gates will open at 6pm on Thursday 5 and Friday 6, but a little earlier at 3pm on Saturday 7.

Kent's Hop Farm is transformed into the Fireworks Spectacular with lots of family fun and children's entertainment. This year the farm will be hosting two separate displays on Friday 30 October and Saturday 31 October. The Superhero display will be on the Friday and the Grand Finale display will be on the Saturday. The family park opens at 10am both days with displays starting at 7pm and 8pm respectively.

Stand back as the townspeople of Ottery St Mary in Devon carry flaming barrels through the streets of the town during the annual Guy Fawkes ritual Flaming Tar Barrels on 5 November. The rolling of the barrels is free for all to watch and there is a fireworks display and giant bonfire that will keep you warm throughout the evening.

Round up the family and head to Yorkshire's premier Bonfire Night display, After Dark Fireworks Spectacular at Don Valley Grass Bowl, which has been going since 1996. Guy Fawkes' Night fans are treated to a giant funfair, fireworks set to music, food stalls, a huge bonfire and a live music stage. This year's event takes place on 5th November with gates opening at 5.30pm and the fireworks display starting at 9pm.

Coopers Fields hosts an annual Sparks in the Park fireworks display - the largest annual pyrotechnics event in Wales and one of Britain's biggest. Expect a beast of a bonfire, amazing pyrotechnics, food stall, funfair rides, plus live entertainment. This year's event will be taking place on Saturday 7 November.