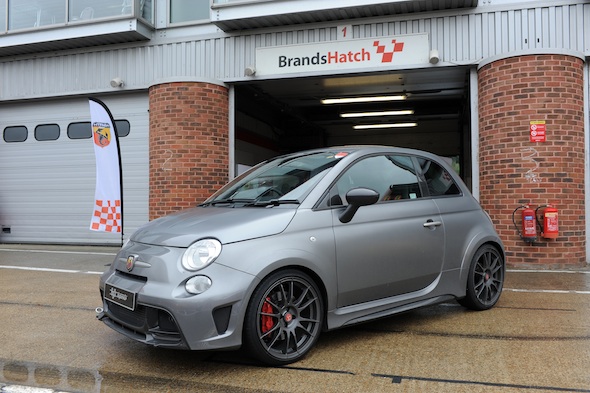 The Abarth 695 Biposto is designed to be Abarth's 'halo' car, sitting at the very top of their range of cars. Abarth bills the 695 as 'the smallest supercar' but the question is of course – is this true?

The 695 Biposto is powered by the same 1.4-litre turbocharged petrol engine that is used in the rest of the Abarth range, but that's where the similarities end.
The engine produces 187bhp which enables the Biposto to race to 60mph in just 5.9 seconds. It also has 184lb ft of torque, meaning that there's plenty of pull throughout the gears. With the exhaust note piped through a dual-stage titanium-tipped exhaust system by Akrapovic, the resulting sound is almost demonic. A little supercar it certainly sounds like.

If you were looking for comfort, this is certainly the wrong car to look at. With no rear seats, a titanium roll cage and a four-point harness, it certainly isn't the most comfortable place to be. However, this car isn't meant to be comfortable.

What you do get instead, is a whole host of racing additions. A rear bumper with a carbon-fibre diffuser is an impressive visual aspect at the rear of the car, as is the oversized roof spoiler. Side skirts with carbon-fibre inserts give the 695 an even more purposeful look, whilst the 'Grey Performance' paint gives the Biposto a menacing, understated stance.

One of the greatest options available to buyers of the 695 is a beautifully machined Dog Ring gearbox kit, which transforms the centre of the cabin. At £8,500 though, it carries an incredibly hefty price tag. With a base price of shade over £30k, the 695 is an investment – but then it is an awful lot more special than a standard Abarth.

First Drive: Abarth 695 Biposto
Up Next

Size-wise, you'd put the Abarth in the same league as a Golf R, Renaultsport Megane or Civic Type R but because of the price that comes with it, the little Biposto is punching much higher – almost Porsche Cayman S high. By being priced higher it may be aiming higher than others – but buyers who want to own this car will do so because they already love it and won't care about any competition from other cars.

As we're sure you can imagine, the 695 is a hoot to drive. With all four wheels shod in bespoke Goodyear tyres the Abarth hangs on into the corners, gripping on with an unending enthusiasm. With both the turbo and exhaust wailing, the experience is full throughout the rev range – it even rides relatively well.

Unfortunately, Abarth still hasn't done anything to adapt the original car's sky-high driving position for the Biposto, meaning that you sit as high as ever – at odds with the racing-car pretentions of the entire vehicle. The standard gear change is pleasant enough, but the dog ring gearbox is the star of the show. Shifts from third to fourth can be done without the clutch, but get the revs wrong and the whole car jolts as if hitting a speed bump. Mechanical, for sure, but get it right and you'll be greeted with a smile-inducing shift. Worth the £8,500? Perhaps.

The steering rack is the same as the standard Abarth, and definitely feels weighty enough. On a greasy Brand's Hatch, the Biposto was certainly a handful, with slippery bends causing it to lose traction readily. Those Goodyear tyres, though bespoke, are still road-legal, so there's only so much grip that they can provide.

On a drier surface the Biposto becomes a bit of a weapon, only hinting at understeer when pushed too far. A front wheel drive hatch with nearly 200bhp is bound to do this, though. Because of the heavily-boosted nature of the engine, the Biposto can suffer from lag at certain times, but there has to be some trade-off between power and engine capacity. Brakes by Brembo finish off the package, giving the Biposto excellent stopping power whatever the conditions.

For those who want the Biposto, the decision will already be made. It's certainly expensive, and perhaps not as capable as other much cheaper rivals, but then that isn't the point of this car. As a 'halo car' it's there to stand as a beacon at the very top of the Abarth range, and include other Abarth owners as part of a much larger 'group'. With the same steering rack and similar interior components, the lineage between cars is obvious, which means that each Abarth owner can feel as though they themselves have a little bit of Biposto in their own car.

As a 'halo car' is ticks all of the boxes, and as the 'smallest supercar' it definitely wins the award.
Tags
Read Full Story