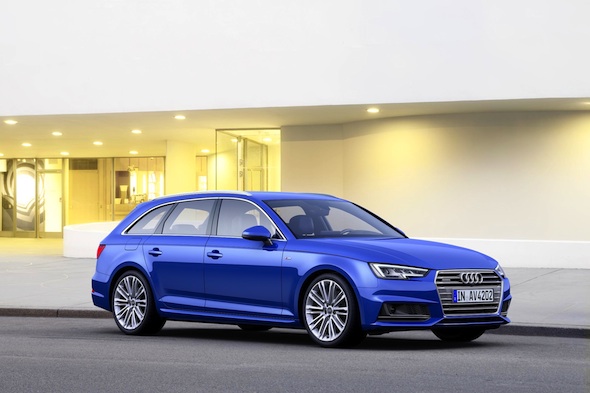 It's been a busy old year for Audi. Not only has the brand been caught up in the emissions scandal that has engulfed its parent company Volkswagen but new models have been rolling off the production lines at a pretty steady pace. Among them have been the Q7, R8 and A4 – and now the A4 Avant, in other words the estate version of the German manufacturer's big-selling B-segment saloon.

This is the ninth generation of the car, built on a new platform to deliver more space for passengers and luggage, and bristling with technology. Quattro all-wheel-drive is available in conjunction with certain engines. It's available to order now, priced from £27,300 on the road, with the first UK customers due to receive their cars early in the new year. AOL Cars was whisked to Marseilles for the day to put it to the test...
What's under the bonnet?

A wide range of four- and six-cylinder engines to begin with, boasting outputs ranging from 148bhp to 268bhp. The 1.4-litre TFSI petrol engine, the entry point to the A4 saloon range, will become available next month. The line-up includes a new 2.0-litre TFSI unit with a revolutionary combustion system and a 2.0-litre TDI offering which is impressively efficient, emitting just 99g/km of CO2 in the SE and Sport models. The best fuel economy is offered by the two available versions of that engine; alternatively buyers could go for the smooth and strong V6 TDI.

Plenty of kit is on offer whichever of the three trim levels you go for. A new Sport option is positioned between the entry SE and the top S line rungs that will be familiar to existing A4 drivers. And as we've already indicated, Audi are keen to stress the level of technology on offer. Depending on the option chosen, Xenon or LED headlamps with LED running lights come as standard, and are combined with features such as three-zone climate control; cruise control; rear parking sensors and the Audi smartphone interface. This supports Apple CarPlay and Android Auto platforms. Clever stuff!

The main two are the BMW 3 Series Touring and the Mercedes-Benz C Class Estate. With the seats down, the Audi bests them both for luggage space, though.

First drive: Audi A4 Avant
Up Next

We were very impressed and it was easy to forget we were behind the wheel of such a big car. Helped by a pretty low drag co-efficient of 0.26 – a figure which would not look out of place in the coupe class – and a weight advantage of as much as 120kg compared with its predecessor, the car is noticeably more streamlined and refined. Inside, it's simply a revelation – everything in the cabin is of a very high standard. The build quality is excellent; the levels of technology impressive... it all adds up to a top, top package.

It's a tricky balancing act to pull off but Audi have managed to do it – create the right combination of aesthetic appeal and everyday practicality. They have created a car that's sleek, smart and sure to appeal to loyal A4 customers. And in case you were unsure, it is totally unaffected by the current exhaust emissions row, with early order figures showing no decline in the popularity of diesel-fuelled models in fact.