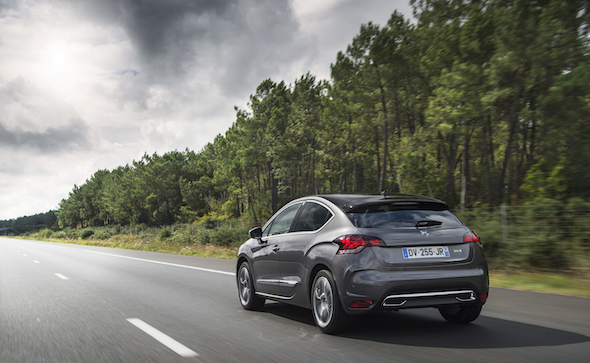 The DS4 is a facelifted version of the popular hatch, offering a more striking front-end design along with a larger touchscreen display and the inclusion of Apple Play phone connectivity.

The previous generation DS4 struggled to attract buyers because of its similarity to the Citroen C4. With this update, DS is hoping to create a more rounded product.What's under the bonnet?

The test car that we drove was fitted with a THP 210 engine. In other words, a 1.6-litre four-cylinder motor offering 208bhp and 285Nm of torque. Having its debut with this updated DS4, the engine can power the car from 0-60mph in 7.8 seconds and onwards to a top speed of 146mph.

Economy is still good however, with a claimed combined consumption figure of 47.9mpg - reasonable enough given the extra pace offered by the engine. CO2 emissions are 138g/km, with the whole package driven through a six-speed manual gearbox.

There are two trim levels to choose from - Elegance and Prestige. The Prestige trim commands the higher premium, but offers such luxuries as leather upholstery, 18-inch alloy wheels and LED Xenon directional headlights as standard. Inside, there's a 7-inch colour touchscreen controlling navigational and media features, along with a six-speaker audio set-up and Bluetooth hands-free connectivity.

Inside, the DS4 offers an interesting mix of contrasts. While the leather-trimmed dashboard in our car felt of a high quality, the plastic buttons on the steering wheel felt cheap. The touchscreen, though intricate, lacks the size or resolution offered by competitors and throughout the cabin there isn't anything especially new or exciting. It's certainly well put together, but certain aspects of it are lacking the premium feel that DS is so concentrated on conveying.

On the exterior, all cars come with a panoramic windscreen, front fog light cornering system and electric folding door mirrors. As far as standard equipment, all cars - regardless of trim - are impressive.

Should you want to take more than one passenger, you may want to try the DS4 out first - rear headroom is limited and light at the rear of the cabin is hampered by large pillars and small windows. The large pillars also make manoeuvring tricky, though the reversing camera that comes as standard with the Prestige trim may help this. Rear stowage isn't the best, with only two door bins offered. They're of a good size, but there aren't any cupholders or even a compartment in the centre arm rest for passengers to stow away items.

First drive: DS4
Up Next

The DS4 is a tricky one to place in the market. Aimed at young professionals who perhaps don't have children yet - which is just as well given the lack of space offered in the rear - it is tricky to see a direct comparative. The best rival to put it up against would be the Volkswagen Golf or perhaps the Volvo V40. Unfortunately, the DS4 falls in the gap between a good-quality budget hatch and a premium small car, with cars such as the Audi A3 and BMW 1-Series feeling much more rounded as a whole.

The THP 210 engine powering our test car certainly felt punchy, and the gearbox had a smooth action which suited the power delivery. However, this engine is unlikely to be a favourite of buyers, as few will be looking for such a high amount of power in a hatch - the diesels are sure to be the most popular.

That said, throttle response was good and was matched by a sporty exhaust note. The ride on the Prestige's 18-inch alloy wheels was a little crashy and lacked the refinement that we have come to expect from a French hatch. Smooth roads aren't a bother for the DS4, but bumpier surfaces found it to be a little unsettled. There's also a fair amount of tyre noise at motorway speeds, too.

Steering-wise, the DS4 isn't going to set any drivers' hearts alight. While grip levels are good and body roll is kept to a minimum, there isn't a huge amount of feedback. What feedback is offered comes in the form of vibration at motorway speeds, which is neither useful nor confidence inspiring.

Pedal weights are good, but the car lacks the finesse offered by other hatches, particularly the Golf.

The DS cars are always an interesting prospect. Looks-wise they're hard to match, with dramatic styling playing a key role in the overall package. The interior of the DS4 is mostly well put together, and the materials used are of a largely good quality.

Unfortunately, if you look past the looks you see a hatchback that simply doesn't offer the same features that come with other 'premium' hatches. There are excellent amounts of standard equipment, but the cramped back seats and lack of rear storage space may make the choice difficult to make for many.

That said, the price attached to the DS4 when taking into account the amount of equipment offered is certainly worth considering.

The DS4 is definitely a charming proposition with its dramatic styling and well-filled interior. But look past the design and what remains is a hatch that is a little rough around the edges and doesn't have the on-road characteristics that alternative cars offer or the interior feel given by genuinely premium cars.